I’ve been busy with 2 concurrent Citrix XenApp / XenDesktop projects over the past month and ran into an interesting problem today when I was told that one of the Citrix XenDesktop pool’s master Windows XP Pro SP3 image was unable to obtain a DHCP lease upon boot up. 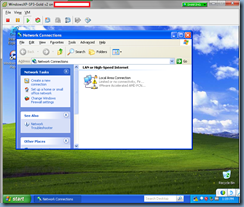 After performing the following checks that I had off the top of my head:

… without any luck, I started fiddling around with the NIC in the guest OS (Windows XP Pro SP3) and the network connectivity check boxes in the settings of the actual VM.  What I noticed is the following:

Since we had tight deadlines, I went ahead and started building a new Windows XP SP3 virtual machine while also made a call into VMware support.  The support engineer didn’t really understand why this was happening, so he asked me if I could change the network adapter from Flexible to E1000.  My first response was that the Flexible adapter was the default for Windows XP installations and whether the E1000 adapter was even supported.  He did a few checks, said yes and pointed me to the following KB:

On a Windows XP Professional 32-bit guest, the e1000 NIC driver is not automatically available even though the e1000 vNIC is supported
http://kb.vmware.com/selfservice/microsites/search.do?language=en_US&cmd=displayKC&externalId=1016456

I went ahead and downloaded the drivers (http://downloadcenter.intel.com/confirm.aspx?httpDown=http://downloadmirror.intel.com/18717/eng/PROWin32.exe&lang=eng&Dwnldid=18717), installed it onto the XP virtual machine unchecking the extra Intel applications and noticed that the virtual machine now obtains a DHCP lease properly upon a reboot.  I asked the VMware engineer to provide me with some best practice guides but was only able to find the following:

Choosing a network adapter for your virtual machine

… and was unable to find any and suggested that we leave it at this state.

As a test, I proceeded to test the new Windows XP Pro SP3 virtual machine I built and noticed that it had the same problem.  I haven’t tested this on vSphere 5 but since we don’t have a lot of time to troubleshoot this and VMware does support the E1000 adapter for Windows XP Pro virtual machines, we’ve decided to continue with the configuration.

I also did a bit more research at night and managed to find the following post:

… where another professional experienced the same problem.