Where are the XenApp 6.5 PowerShell commands? Why can’t I execute them in PowerShell?

… but receive the following error:

You also tried adding the Add-PSSnapIn Citrix.XenApp command but the the command prompt says the Citrix modules have already been added.

What we should do to get the additional Citrix XenApp PowerShell commands is to either start the Windows PowerShell Modules command prompt as an administrator from: 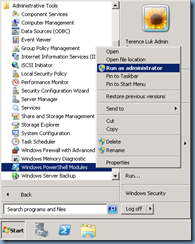 Once the snap-ins are loaded, try typing Get-XA and then the tab key:

If the command gets auto completed with a XenApp command, you know you’re on your way.

What I noticed was that if you just launch PowerShell from the pinned icon in the taskbar, you need to run the Add-PSSnapIn Citrix.XenApp.Commands command to get the XenApp cmdlets because the window that launches does not show the citrix modules being loaded:

I know this looks simple but I’ve been asked a few times about this and I can see why it can get confusing.

So what happens if the command doesn't get auto completed and fails?