You attempt to uninstall Citrix XenApp 6.5 from one of your servers but it fails with the following error message:

Operation could not be completed (error 0x00000705). Windows cannot locate a suitable printer driver. Contact your administrator for help locating and installing a suitable driver. 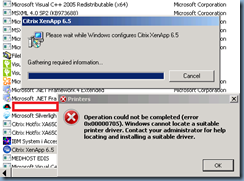 This error really got me thinking and trying to figure out why something related to a printer would stop me from uninstalling XenApp 6.5 on a Windows 2008 R2 server.  The first thing I tried was to remove all of the printers in the Devices and Printers console but that didn’t work.  I then followed by uninstalling various applications that was published by XenApp 6.5 (note that this XenApp server already had all the applications it published removed from the AppCenter) but that didn’t work either.  As I began running out of ideas, I stared at the Programs and Features window and noticed 2 hotfixes I installed for this XenApp 6.5 server: 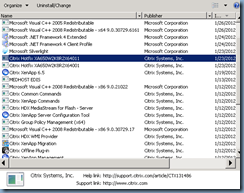 Since I had nothing to lose, I went ahead and uninstalled those 2 hotfixes and long behold I was able to uninstall XenApp 6.5 without any errors.  Strange but I’m glad I managed to uninstall it with Programs and Features even though the uninstall didn’t remove the node from the farm (I had to manually remove it).

Ok, anyone who´s reading this here:
I got the same Problem while uninstalling XenApp6.5 and this was the only Post guiding me in the right direction.

I had the same 0x00000705 error when trying to install Hotfix rollup pack 5 for Xenapp 6.5 on our servers.
Recently I installed hotfix "XA650R04W2K8R2X64020.msp" which is part of the complete rollup pack 5.
After uninstalling this single hotfix I was able to succefully install Rollup pack 5.

Your article gave me a hint to uninstall Roll-up pack.
I was trying to move xenapp 6.4 server to different farm. Removed it successfully from current farm, but while joining to new farm it was giving weired error related to powershell while saving configuration in xenapp configuration wizard .

Powershell error I found not at all realated to what I was doing. I was almost running out of all options and was about to uninstall entire xenapp6.5.

Before that I tried uninstalling roll-up pack and wahooooo , I could successfully join my xenapp 6.5 server to new farm ... No need to uninstall entire xenapp6.5 or reinstall windows server itself. ..

Thanks a ton to you , I came across your article which gave me hint to try uninstalling roll-up pack ...

citrix do not have any best practice suggession while doing any task....