I’ve been having some issues with 2 environments when configuring pass-through authentication for the Citrix Web Interface 4.6 servers and now that I finally have the issues resolved, I thought I’d write a post about a few things learned during the self troubleshooting process and what the Citrix Web Interface and XenApp engineers mentioned to me during the support calls.

Note that some of the items I’ll be including in this blog post may be repeating what the following video mentions:

How To: Configure Pass-Through Authentication with Web Interface 5.2
http://www.citrix.com/tv/#videos/1405

… as well as the following eDoc from Citrix:

… but since it’s not always convenient to watch a video during a deployment, I’ll include them as well.

The following 2 plugins are supported for pass-through authentication on users’ devices:

Note that while the documentation only specifies these 2 plugins, the full Citrix Receiver plug-in is also supported but you need to make sure you download the Citrix Receiver (Enterprise) which requires you to log into your Citrix account to obtain and not the regular Citrix Receiver because although the latter allows you to install the components required for pass-through authentication via switches, it’s easier to just use the Enterprise version to get the components installed.  More information can be found here at my previous post: http://terenceluk.blogspot.com/2012/01/citrix-xenapp-65-pass-through.html

For security reasons, the Citrix online plug-in – web does not include this feature.

Step #2 – Enabling Pass-Through for the Clients

The second step is to actually enable all of your clients (workstations and users) for pass-through authentication.  The way to enable your clients is to use Active Directory’s group policy to apply both Computer and User settings to each domain user and computer object that will be using the Citrix environment.

I found the video I listed above a bit misleading because it shows you how to load an ADM file and apply it to a local computer.  The presenter in the video also doesn’t make it clear as to where you’re applying this local policy and therefore may lead you to think that you’re applying it to the Web Interface servers which is incorrect!

Citrix doesn’t make it clear as to what the best practice is for setting this policy which doesn’t surprise me as every domain is unique in their own way and if I had to think about the items to consider, I would suggest the following:

Why do I see Citrix Receiver and Citrix online plug-in in the same icaclient.adm template? 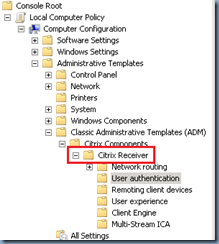 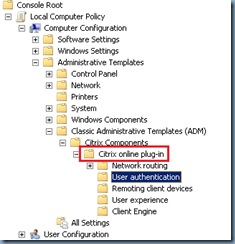 I’ve asked 2 Citrix engineers about this and was told that they can be used interchangeably since the Citrix Receiver is the replacement for the Citrix online plug-in.

Where can I find the icaclient.adm template? 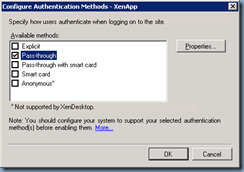 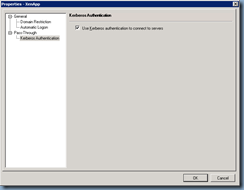 While troubleshooting the issue I had with pass-through authentication with a Citrix engineer, he had me modify quite a few registry keys and local computer policies which I did not document but was told that they usually don’t need to be modified.  With that being said, one of the changes he asked me to make and said was worth trying if I ever ran into issue was to modify the Web Interface, XenApp, XenDesktop domain computer objects to allow for delegation via Active Directory Users and Computers shown here: 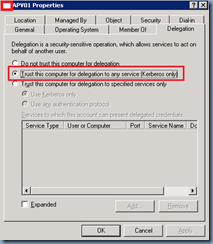 **Note that I’ve gotten pass-through to work in several environments without the delegation setting shown above.

While troubleshooting the pass-through authentication issue with the Citrix support engineer, he constantly asked me to check to ensure that the following process: 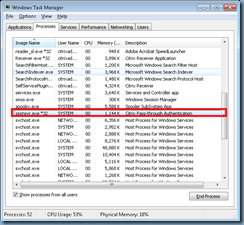 You must install the Citrix online plug-in or Citrix Desktop Viewer Plug-in on your users’ devices using an administrator account. Pass-through authentication is available only in these plug-ins, which are included on the XenApp and XenDesktop installation media. For security reasons, the Citrix online plug-in – web does not include this feature. This means that you cannot use Web-based client installation to deploy Citrix plug-ins containing this feature to your users.

… as shown in the snippet above, the Citrix Receiver is not mentioned.

While it’s obvious, I’ll state it anyways: Make sure you check for hotfixes available for the XenApp, XenDesktop or Web Interface servers.  When I finally made the call to Citrix for support, the first thing the engineer had me do was install the following hotfix for the XenApp 6.5 server:

While the hotfix didn’t end up fixing the server, it eliminated the possibility that not having it installed was causing the issue.

Hope this helps anyone who may be having issues with configuring pass-through authentication for their Citrix environment.

The game walks into one's bag

Hello, I love reading through your blog, I wanted to leave a little comment to support you and wish you a good continuation. Wish you best of luck for all your best efforts..
Citrix Web Interface