I’ve always liked how there was a ThinApp-ed VMware vSphere Client 4.0 available for download as it was always handy to have but when I recently did a quick search for version 5.0, I noticed there wasn’t one readily available for download.  Since I’ve never actually tried ThinApp-ing the vSphere Client, I figured I’ll take this opportunity to give it a shot and the following demonstrates what I needed to do to get the application packaged.

***Note that I’ve done minimal testing with this ThinApp vSphere Client other than connecting to a vCenter and clicked around but I’ll update this post with any problems I come across as I use this more.

Start by running a prescan operation on your clean desktop operating system (I used a fresh Windows 7 32-bit virtual machine): 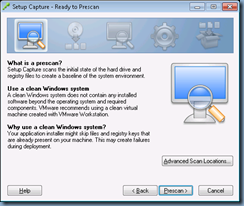 Wait till the prescan operation completes so that you end up at the postscan screen: 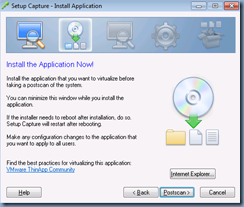 Prior to starting the postscan, proceed by launching the VMware vSphere Client 5.0 install and answer the wizard prompts to start the install: 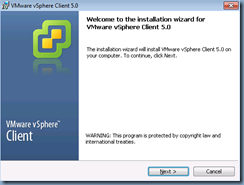 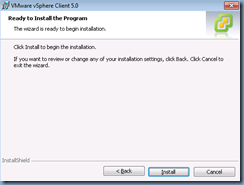 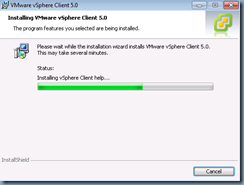 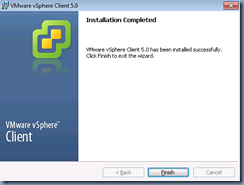 As with one of my previous posts:

… the Building Project process will fail if we don’t remove the 64-bit executables from the installation directory.  The following are screenshots of what would happen if you don’t remove the vnetlib64.exe file from directory: 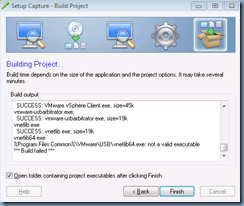 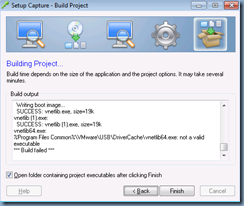 Since the vnetlib64.dll also looks like it’s used by the vnetlib64.exe executable, I went ahead and deleted that file from both directory as well:

I proceeded to run the post scan once I deleted the files from both of the directories: 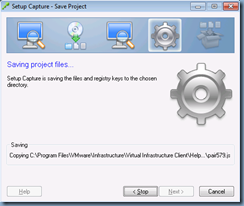 Once of the things I noticed was that the post scan appeared to take extremely log and it seemed as if it was taking long because of all of the .js files but it does eventually finish with the following 3 warnings:

A new kernelmode component "VMware hcmon" was installed, this is not supported by ThinApp 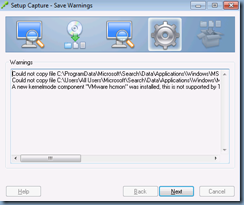 The warning messages referenced 2 log files and a component that indicates ThinApp does not support which didn’t appear too concerning so I proceeded with the build: 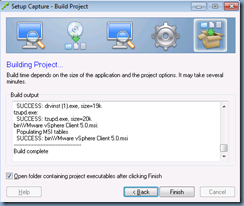 Click on the finish button to close the wizard and you should now have the package built:

For those who are interested, the completed captured ThinApp package ended up being 1.54GB: 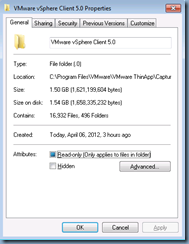 Assign the ThinApp package as you normally would: 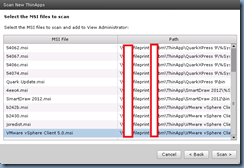 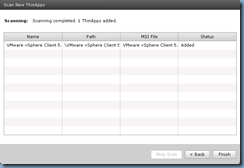 Test the application in the assigned virtual desktop: 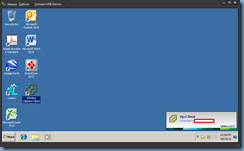 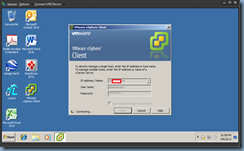 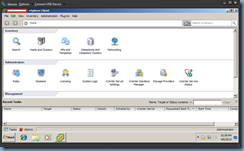 There you have it.  Nothing spectacular and the process was fairly easy.  Hope this provides a good demonstration of what the process of ThinApp-ing vSphere Client 5.0 looks like.