Attempting to perform “Update inventory” on a master image for Citrix XenDesktoip 5.6 with a personal vDisk throws the error: “Personal vDisk inventory is not supported on this machine.”

As I mentioned in one of my earlier posts, I was extremely excited with Citrix’s new launch of the personal vDisk for their XenDesktop 5.6 platform that not only preserves user profiles but also allows installation of applications custom applications which gets redirected to a separate disk so that when a desktop catalog gets recomposed, these custom installed applications would also be retained.  Having worked with VMware View on a few projects, I found that as straight forward as the setup may be, you may encounter some errors and since this is relatively new, there aren’t a whole lot of information available.

Just as the title suggests, I ran into an issue during one of my initial setups and while there probably are a lot of possibilities that may cause this error message, the following is one of them.

First off, I’m using MCS (Machine Creation Services) and not Provisioning Services but my guess is that this is probably applicable to the latter as well.

The following actions are what you did:

1. You’ve just cloned an existing master image that has the new XenDesktop Virtual Desktop Agent (VDA) 5.6 installed which you have ran an inventory job prior to shutting it down.

2. After cloning the master image, you proceeded to sysprep the virtual desktop to generate a new SID.

3. You proceed with deploying a new desktop catalog with this cloned master image. 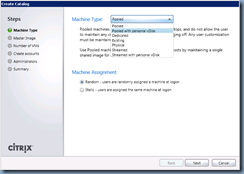 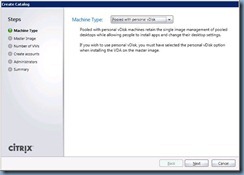 4. Once the desktop catalog and desktop group was created / assigned, you proceed with logging onto the virtual desktop via the Desktop Viewer only to be prompted with the following:

Personal vDisk failed to start because the snapshot inventory has not been updated. Update the inventory then try again.

No problem, so you fire up your master image and try to run the Update inventory job: 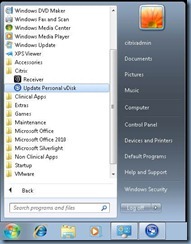 … but then you receive the following error:

Personal vDisk inventory is not supported on this machine.

You’re at lost because the image you cloned from was used to create a working pool that has vDisks.

As I mentioned earlier, there are probably a lot of reasons why you would receive this error preventing the desktops in the pool from working but in my case, it was because of the following:

I’m not sure why although I’m sure the logs would probably tell me more but it appears master image’s vDisk feature no longer works if you sysprep it with the agent installed.  What I ended up doing was uninstall the VDA, reinstall, re-inventory and everything started working again.

Pretty old but maybe it helps someone.
When you clone a machine and then rename it it doesn't rename the regkey HKLM\Software\Citrix\personal vDisk\Config --> MachineID.
If this value is different from the hostname the Inventory process "thinks" it runs within a VDA. Once you change this value to the hostname of the Master VDA inventory works. That's what happens if you reinstall the VDA.