You’ve just completed the deployment of a Citrix XenDesktop 5.6 desktop catalog pool with or without PvDs and assigned a desktop group to the catalog but notice that the State for some virtual desktops are stuck at Unregistered state:

You continue to wait but after minutes and hours, the state is still stuck at Unregistered.

While there can be many reasons why a subset of your desktops are stuck at this state, one of the reasons I’ve encountered is that the virtual desktop has hung.  Browsing to the virtual desktop’s Summary tab within the vSphere Client shows that VMware Tools is not running and no IP address has been picked up by the VMware Tools: 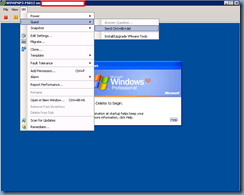 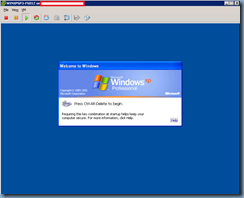 If your desktop is stuck in this state and has become unresponsive, try sending a Reset command to the virtual desktop with the vSphere Client: 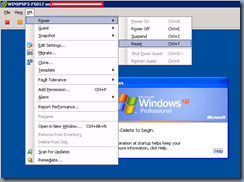 Once the virtual desktop successfully restarts and becomes responsive, check the state in Desktop Studio:

If your virtual desktop hasn’t hung as shown in this example, the next step is to try and log into the desktop via the console and check the event logs because the unregistered state usually means that your desktop’s VDA (Virtual Desktop Agent) is unable to contact the DDCs.  This can be caused by a misconfiguration in the DDC settings when you installed the VDA or the virtual machine does not have network connectivity to the DDC.