I’ve been asked several times about the differences between Citrix’s XenDesktop 5.x pooled desktop catalogs and VMware View 5.x linked-clones with respect to the differences in the consumption of storage.  While I have yet to find the time to write up a post about VMware View’s provisioning process, I figure I’ll write this post about XenDesktop first because I’ve been working with the product all weekend and have access to some a few environments to capture some screenshots.  First off, Daniel who is a lead architect at Citrix has a great write up here:  http://blogs.citrix.com/2011/06/28/machine-creation-services-primer-part-1/.  The write up does not include PvD disks but nonetheless provides a great explanation of what happens during the provisioning process.  This post will not to into as much detail to differentiate between what automatically and what manually happens but rather show what folders and files are created.

Before I begin, let’s look at the master image we’ll be using:

Here is the master image’s properties: 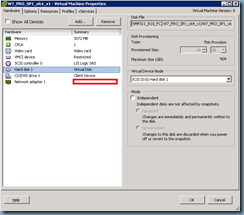 As written above, we’re going to spread the virtual machines desktops in the desktop catalogs onto 2 separate stores as well as use a dedicated LUN for the PvDs:

We’ll begin by creating a new catalog in desktop studio: 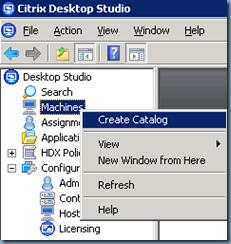 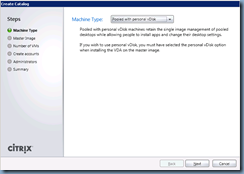 Select the snapshot for the master image: 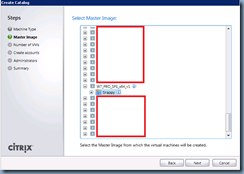 Leave the Total size of end-user personal vDisk as 10GB: 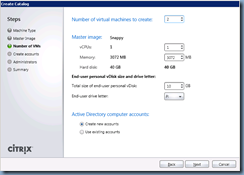 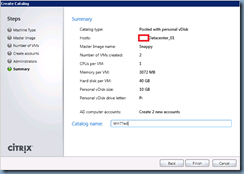 … files during cloning process and will ultimately be removed (after the files are copied out): 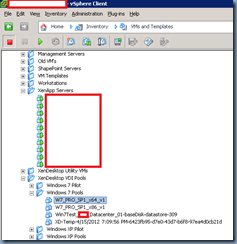 Note the small size of the XD-Temp disk (sorry about the screenshot as I realized I didn’t expand the column wide enough to show the extensions so I created another pool afterwards to show this:

Note the identical size of the base disk and your original master image’s operating system disk:

Also note that the virtual machine will get deleted but the data files will remain in the store.

Once the base disk is successfully cloned, the virtual machine will get “reconfigured” and then deleted:

What you’ll quickly notice is that the virtual desktop’s folder does not contain any large vmdk file that represents the disk with the operating system and this is because that is stored in one folder shared amongst all of the other virtual desktops in the desktop catalog:

If you proceed with comparing disk 1 of 3 for 2 of your virtual desktops in your desktop catalog pool, you’ll see that disk one represents your operating system 40GB disk: 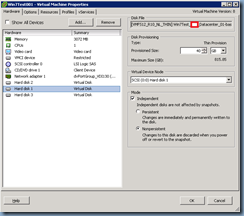 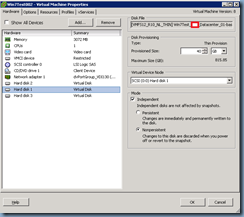 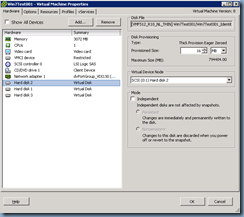 Note that the identity disk is thick provisioned:

Disk 3 of 3 will contain the personal vDisk vmdk file which in this case is stored on a different LUN: 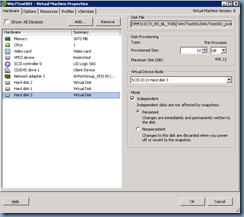 Note that the PvD for each virtual desktop is thin provisioned:

As an example, if we originally selected 2 LUNs for storage:

With 2 virtual desktops provisioned, if we proceed with adding another virtual machine to the desktop catalog: 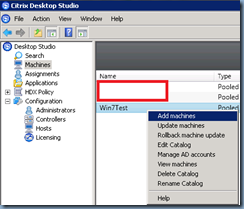 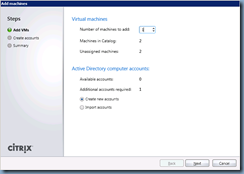 We’ll notice that nothing much appears to happen in the task window of the vCenter:

… and that the provisioning process is extremely fast.  The reason for this is because only the virtual machine metadata files need to be copied and there is no base disk image to clone since it already exists on all of the LUNs.

Reviewing the provisioning process shown above, some of the important takeaways I would ensure is taken into consideration during the sizing of LUNs are as follows:

***The following is the delta disk I was referring to in item #4 above:

Hope this helps anyone who may be looking for an explanation of how virtual machines in desktop catalogs are provisioned in XenDesktop 5.6.

Interesting. I have set up a similar pilot of PvD but instead of using MCS I used PVS. With PVS the "XenDesktop Setup Wizard" is invoked to creat the Catalog and PvDs. Unfortunately, all of the Personal vDisks it creates on my VMware VMFS volume end up being THICK provisioned. There was never any option during the Wizard to specify thin or thick.

Great article. Has anyone tried to move the VM's from one datastore to another? What we found is that the identity disk refereance gets removed and a full copy of the base image disk gets created for the vm that we migrated to a new datastore.

I just migrated about 150 personal vDisk VMs and then noticed this was happening. Do you have any additional insight on this? Does it prevent images from being updated? I'm not so worried about space as dedupe will take care of the basedisk getting recreated each time, but it is very messy compared to how it was supposed to be.

nbiolo, you have to do a custom move on the disks in a vm. If memory services me right you have to move the reference disk first, then move the vm. If that does not work switch the process around. We ended up getting it to work.

Aitor, the reason for only seeing the 4.99GB when you allocated 10GB is because the PvD splits the disk up into User and Application Data keeping the 2 separated. When a user installs an application it goes into that respective area as does user data such as My Documents. Think of this as the change log for your base image. We have had some minor issues with this setup but overall it works pretty well. There is a new version of the PvD that we are hoping to test out soon. This version will dynamically allocate the space between User and Application space. You will still need to determine what your split will be but after that the system can pull space from one area over to the other if one area fills up. That is how I understand it at this point.

Now if you have more than one snapshot of the master image, the base disk will be Thick Provisioned even if the master's is Thin Provisioned.
https://discussions.citrix.com/topic/365787-base-disk-is-not-thin-provisioned-after-xendesktop-76-upgrade/

This article was FANTASTIC! No where does Citrix specifically mention that additional storage at the whole storage level separation of TWO DISKS! Not one that encompasses the Storage being absorbed.

If they do they talk about it the only do that individually- not both, at least from the Citrix perspective anyway.

Fastidious answer back in return of this issue with firm
arguments and explaining all on the topic of that.