Before proceeding to talk about this particular issue with installing NetApp Virtual Storage Console 2.0.1 (installation binary file: VSC_2.0.01P1-win64.exe), let me state that I wasn’t the one who ran into the issue and I wasn’t the one who solved it either.  What happened was that I was working on the same environment as a NetApp consultant and although we were working on deploying different components, he showed an issue he was tackling for most of the morning and the resolution.

… but it continuously fails during the install and while reviewing the logs, you see indications that the process fails when it tries to install the wrapper service.

After the NetApp consultant ran through the obvious checks such as turning off UAC and checking file permissions, he went into the folder that was created during the install that contains the installation binaries for the wrapper service required to install the VSC:

He had a hunch that since the main installation process wasn’t able to install the wrapper service, perhaps he can try installing it manually by executing batch file:

Launching this batch file appeared to have installed the wrapper service properly which is shown in the following screenshots of the services console: 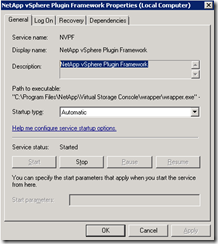 From here on, he launched the main VSC installation binary and the installation process completed without any errors.  The NetApp consultant says he’s never had this problem before with the other installs so both him and I believe it might be specific to the Windows 2008 R2 64-bit template we’re using as there were some customizations and applications on it prior to running the install.

In case you’re wondering who the NetApp consultant was, his name is Derek Lian from Calgary.  I found him to be extremely knowledgeable not only with NetApp but also the other technologies that use their storage solution for storage.  Definitely one of the best NetApp consultants I got to work with.

great post! I'm have similar issues with a vanilla version of windows 2008 r2 in a demo lab.

We had nearly the exact same issue occurring here as well. We could get the Windows 2008 64-bit to install using the run-as functionality with or without UAC on.
However the plug-in would routinely dies in the VMWare client.

To get the service running we would as a work around run the wrapper.exe file to get the port 8143 listening again and restart the VMWare client. We had to do this since the NetApp vSphere Plugin Framework was not present. Trying to reinstall/Repair failed to yield any install errors.

We now have ran the executed the InstallNVPFServer batch file after the wrapper.exe was active and we FINALLY have the NetApp vSphere Plug-in Framework Service displayed in the Local server services tab. I did have to go into this service and start it manually at first.

I strongly hope this solves our issue.

Also note - we did set up a dedicated service account as well as an attempted fix action.

also...another failed troubleshooting method was replacing the wrapper.exe file with a newer version. The wrapper.exe will run with warnings about compatibility but it was not a silver bullet answer like the above article addressed.

It was very annoying for every 2 or 3 days the NetApp VSC plug-in to fail in the VMWare Client. I hope NetApp will fix this issues for other Windows 2008 64-bit SP2 server users in future release for the Virtual storage console (vsc) 2.1 install.

Had this same error with the new VSC 4.1 - thank the power of Google, you saved me hours of hair pulling.

I am having some problems with this service it is running fine it is just creating a huge nvpf log file this never gets archived unless the server is rebooted or the service is restarted has anyone come across this before ?