We had a client last week who suffered a SAN failure which required them to restore SAN snapshots that were a month old.  I won’t go into the details of the situation but I was brought in to bring their directory services up and determine what course of action we could take.  To make a long story short, they had most of their infrastructure virtualized with only 1 physical domain controller named DC2.  The virtualized environment which included DC1 and their Exchange server was restored but since DC1 was a snapshot, the event logs were littered with errors about USN rollback.  From here on, I had the choice of either fixing the USN rollback to get DC1 operational OR use DC2 which had a more recent directory services database up and fix the rest of the infrastructure servers.  I personally did not want to lose all the changes they made to their Active Directory and therefore opted to use DC2. 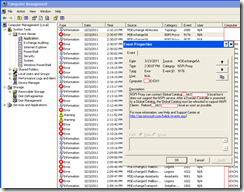 What threw me off was that DC1 was no longer on the network and I had completely removed the domain controller’s metadata with NTDSUtil and all records in DNS.  After reviewing the event logs a few more times, I began remembering that I had come across an article a few years ago (don’t ask me how I remember) that had a fix for an Outlook Anywhere issue.  The article required registry changes on the Exchange server which referenced an NSPI Target Server.  From there on, I did a search on Google and finally found that article here:

Not surprisingly, I reviewed the registry for the keys and found references to DC1 hardcoded into the registry.  What I ended up doing was updating the registry keys to the appropriate DC, DC2, and the event errors went away. 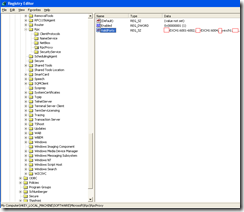 Hope this helps anyone that may come across this problem.

Wow. Saved my life. Thank you. NSPI is very dependent on RPC. I have a sever that RPC is being difficult on. This worked. Gives me time to ust bring up a new server instead of troubleshooting the RPC forever.