This post won’t be like the step-by-step or how-to posts I usually write but rather something I can reference to if I ever need to update a component’s firmware within a Cisco UCS B Series Infrastructure.  The guide to use to find all the CLI commands required for updating and activating firmware for the components is:

The screenshot below is taken from the guide: Cisco UCS Manager CLI Configuration Guide, Release 1.4(1) 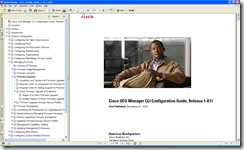 As an example, the screenshot below shows steps for updating and activating the firmware for an adapter: 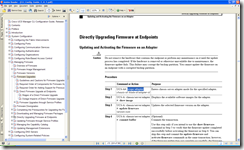 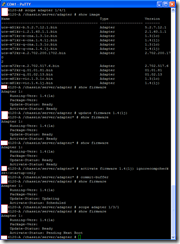 It’s obvious from the commands above that using the CLI to upgrade firmware may not be the most efficient way of doing so since you’re going to be executing commands to update one component at a time.  In the example above, the infrastructure I used had 6 chassis with 4 blades each so you can imagine just how long it would have took.  Due to the lack of time I have, I didn’t get a chance to try digging a bit deeper on whether it’s possible to execute a command to update and activate more than one component of the same type at the same time.  If I ever do get to spend more time on this and find that there is a way, I’ll write an update.