A coworker was recently installing the Nexus 1000v while having a desktop sharing session with another coworker and I when I noticed that for a split second, he forgot whether he was supposed to choose the OVF:

Since I recently had to deploy the Nexus 1000v and have gone through the deployment guide, I spotted the hesitation and told him to use the OVA because of the version of ESXi we were using.  Seeing how I may one day forget about the difference myself, I thought it would be a great idea to write this post to quickly outline the differences for future reference.

As shown in the documentation, the OVA is used when your ESX or ESXi hosts are version 4.0 or later while the OVF is used for 3.5:

Deploying an OVA directly on an ESX/ESXi Host

If you’re connected to an ESX/ESXi host directly with the VI Client or vSphere Client and try to deploy an OVA as shown in the following screenshot: 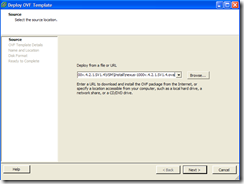 You’ll get the following error once you click on the Next button: 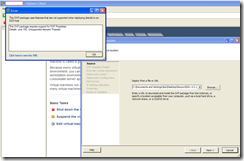 Deploying an OVF file will not throw this error message: 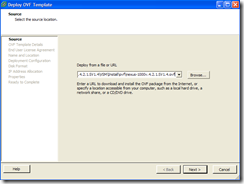 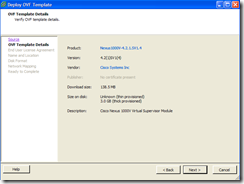 Steps provided in the wizard

If we have the template deployment wizard for an OVA (connected to vCenter) and an OVF (connected to an ESX/ESXi host) side by side, we’ll notice that the OVA has noticeably more steps:

The following is a side by side screenshot (OVF on the Left and OVA on the Right):

Hope the information here provides a clear demonstration of the differences between deploying the Nexus 1000v via an OVF and an OVA.

One more point to note:

(This is specifically for the N1k)