I ran into an extremely annoying problem today while setting up a new UCS B series infrastructure cluster for a client where a newly configured 6120 would get stuck in an election progress and seemingly never promotes itself to become the primary fabric interconnect even though the other node is down.  The following is what the command show cluster state outputs:

A: UP, ELECTION IN PROGRESS (Management services: UP) 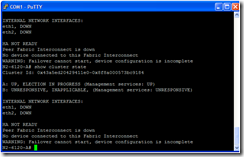 The reason why this problem was annoying was because as long as this fabric is stuck in this state, I was not able to log into UCS Manager to work with the GUI.  I know enough to get around within the CLI but tasks such as reviewing the logs to troubleshoot was much easier to do with the GUI.  To get around this, you can use the following command to force the fabric interconnect that is stuck in limbo to become primary node:

Once you’ve successfully forced the fabric interconnect to become the primary node, you will be able to connect to UCS Manager via the cluster IP.

Does this command work? Your screenshots show that it failed?

very nice blogs!!! i have to learning for lot of information for this sites..