For those who have set up LDAP authentication against Active Directory for UCS Manager 1.4.x, you may have noticed that there’s a discrepancy between the screenshots and CLI output provided in the configuration guide: 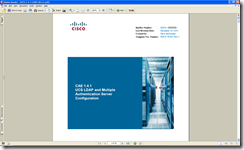 As shown in the screenshot below, we are instructed to configure the LDAP Group Rule as follows: 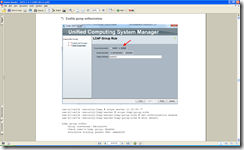 If you look closely to the instructions, you’ll see that the screenshot actually shows that: 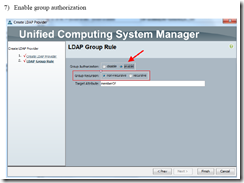 … but the CLI output below shows that:

I’ve gone through the instructions numerous times but cannot find any indication as to what that setting is supposed to be configured as.

So which one are you supposed to select? 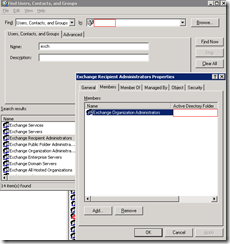 I suspect that if we do not turn on Group traversal: Recursive a users that are in nested groups such as this will not authenticate.

I have yet to get a chance to test my theory but when I do, I’ll update this post.

did you ever get the memberOf / recursive lookup to work for nested groups. I just cant at the moment

Sure looks like this is conceptually broken (from doing an nxos debug ldap all.)

With recursion turned on, the UCS system will search for the user, then retrieve all the groups they are a member of. If the groups are defined in a group map, it will then proceed to recursively search for groups that those groups are members of. (Which works) However, unless the group that is in the group map is one the user is a member of directly, it will never check, for the members of that group. So for a typical recommended AD nested group configuration where you want to assign the users to a global group and the permissions (i.e. Group Map) to a Domain local group and then nest the Global in the domain local, it will never check the membership of the global group to find the domain local.