While I’m sure not everyone is going to run into the same issue as I did here but because this issue almost got me to pick up the phone to call VMware support until I made one last attempt on something that ended up getting me past the error message, I thought it’s worth while to share what was done.

I’ve successfully installed Single Sign On to Join and existing vCenter Single Sign-On installation and installed SSO as Multisite in the previous steps so I proceed to install the VMware vCenter Server component: 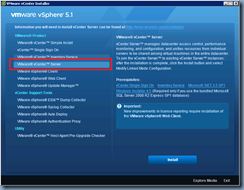 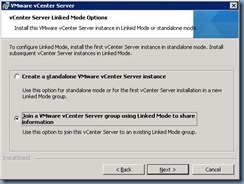 Made it to the Registering with vCenter Inventory Service process: 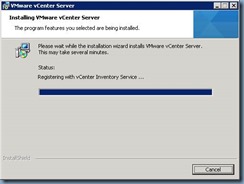 … but then received the following error:

I chose not to force the operation so the installation fails with:

The 2 logs the information messages point to are as follows: 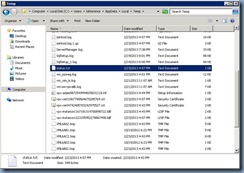 … and I see the following error:

… which unfortunately did not apply to my situation.  A search of the string SSO domain ID is does not match returns the following thread:

… where users indicate that they’ve encountered this issue because SSO was installed in SIMPLE mode.  This unfortunately also does not apply to my situation because I installed the first SSO service with: 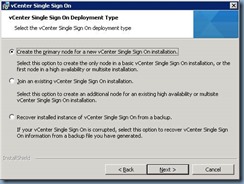 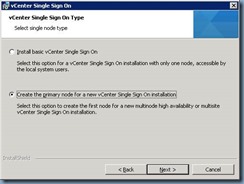 What ended up solving my issue was when I realized that I prior to receiving this error message, I had a 2 other failed attempts running the same steps to install the VMware vCenter Server component.  What I decided to do next which was just a shot in the dark was to log onto the first vCenter I deployed (node 1) that I’m trying to link this new vCenter (node 2) to via Linked Mode and launch the vCenter Server Linked Mode Configuration: 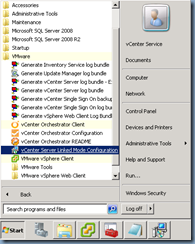 I proceed through the wizard: 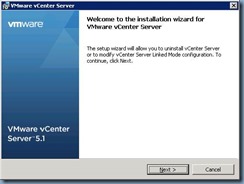 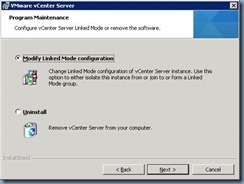 … and noticed that the option available was: 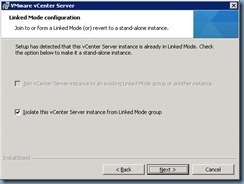 This led me to believe that the previous failed installs had already created the Linked Mode group on the first vCenter node so I left the checkbox selected and proceeded with the wizard to isolate the primary vCenter: 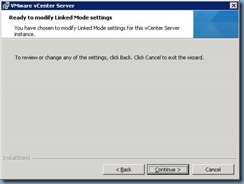 I didn’t think much about the step partly because I didn’t think it was going to work and it was just a shot in the dark so I did not screenshot the prompt I received asking me to force the isolation, which I answered Yes, and the prompt indicating that the modification was complete but once this completed, the VMware vCenter Server component was able to install successfully and the 2 vCenter servers operated correctly in Linked Mode.

Thanks for the tip. This fixed one of my errors.

Had exactly the same issue. This post resolved the problem. Its worth noting the linked mode configuration isolation threw an error which said it could not isolate the instance, I went ahead and chose 'force'. No further errors and I was then able to install the linked mode instance. Thanks a bunch!

Thanks Terence. Had the same issue in my SRM lab. In my case, linked mode was working fine until I killed the second vcenter server (it was a linked clone and I killed the parent snapshot!!). vCenter01 would complain about not being able to find vCenter-02.

There was obviously some stuff left over from the first install which meant the new build of the secondary vCenter server failed.

"A vCenter Serer is already registered with this instance of Inventory Service. Do you want to overwrite that vCenter with the one that you are currently registering?"