Ran into an interesting problem today as I was asked to have a look at an Exchange Server 2010 resource mailbox issue since I was already in working on some Lync Server 2013 issues.  Note that I understand the problem and fix is fairly obvious because this is a feature in Exchange but since I didn’t see a resolution when I searched for this issue, I thought it may be good to write a post to assist anyone looking for a quick answer.

The issue the client was having was that Human Resources noticed the private meetings they booked with a certain resource mailbox set up for a meeting room was made public.  This meant that anyone in the organization who looked at the calendar of the resource mailbox would see the full details of the meeting and when HR attempted to edit the meeting, the little lock icon would be grayed out as such: 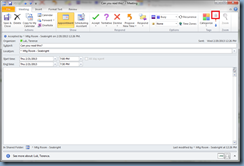 Since this appeared to only affect one of the meeting rooms and not the others, I went ahead and pulled up the properties of a meeting room that was working and the one that wasn’t and compared the settings until I found that the following attribute:

Remove the private flag on an accepted meeting 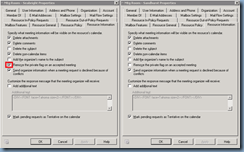 Note that all of the old meetings that had the private tag removed had to get recreated because opening them would reveal that the lock icon is still grayed out.

Thanks for the explanation!

Awesome straight to the point.