I recently completed a Lync Server 2010 to 2013 migration and found that setting up RCC integration between Lync Server 2013 and Avaya AES (Application Enablement Services) was exactly the same as Lync Server 2010.  Avaya has yet to provide an updated guide for the configuration but the following PDF for Lync Server 2010 should be enough to get most administrators started:

As much as the steps in the guide above seem pretty straight forward, there are certain sections that never worked for me.  First, I still experience the same error I did in Lync Server 2010 when I attempt to generate the certificate as outlined in one of my previous blog posts:

Additionally, because it’s been some time since I’ve configured RCC, I couldn’t remember what Certificate Alias I was supposed to select when generating the certificate for the Avaya AES server as shown in the following screenshot: 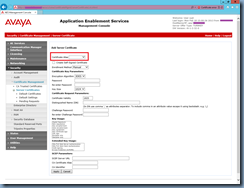 The choices are as follows: 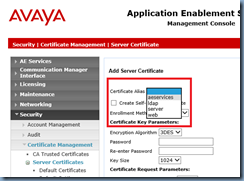 Unfortunately, the Avaya guide doesn’t state what the alias should be and as a matter of fact, doesn’t even demonstrate how to generate it like the old OCS 2007 one so in case anyone is searching for this information or find themselves in a situation where their RCC isn’t functioning and isn’t sure whether they have their certificate generated properly, the alias should be set to aesservices: 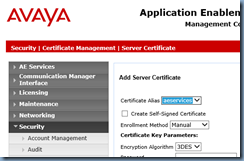 Hope this helps anyone who might be looking for this information.

is there any work to be done if you have RCC working in Lync 2010 and you are migrating to 2013? Will the trusted app keep or are there steps that need to be performed to migrate it over?

I am also wondering about the question posed above. We have the similar situation and need to move the integration to the 2013 pool.

Thanks for sharing these.
It’s always useful to get pointers to the good blogs out there.
You might also be interested to know more about our company -
Parana Impact, which is one of the leading database marketing,
data intelligence and digital marketing service provider.
Avaya Users Email List Suitable to small scale to large scale companies which will focus on driving more revenue and increase profitability.

I would like to say that this blog really convinced me, you give me best information! Thanks, very good post.
Digital Marketing Service provider in indore
Keep Posting:)