I have had quite a few clients who continually ask me as to when the Skype and Lync federation details are going to be available and it was not until a week ago when Microsoft officially released a statement that it would be around June this year.  With that in mind, I’ve also had a lot of clients who have found information on the web that there is some form of federation available between Skype and Lync so instead of repeatedly telling people the same information verbally, I decided to write this post so I can point people towards it.

What I’ve been telling clients recently was that if they wanted to be able to IM or perform audio calls with Skype users, the way to do it was:

Once Skype users have merged their Live Messenger account that has the Lync contact a part of their contact list, they should then be able to log into Skype with their WLM credentials and send instant messages to their Lync contacts.  The following is a screenshot I took from my Skype client as I message my Lync account:

The following is a screenshot I took of my Lync client receiving a message from my Skype account: 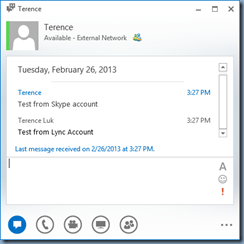 What I noticed while testing was that the only options available from within Skype when in the context of a Lync contact were Call and IM.  The instant message feature worked as expected as shown in the screenshot above but the Call feature would attempt to dial out but cut off almost immediately.

However, it does look like calls initiated from my Lync Client to the Skype contact works although Skype labels the Lync contact as Unknown phone number calling:

Note that you can try initiating a video call from Lync but the video component will fail and only an audio call is established: 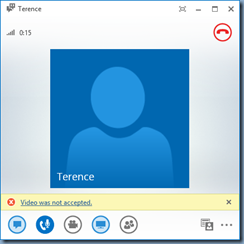 Note the Video was not accepted message.

So there you have it.  There’s limited federation connectivity between Skype and Lync available where:

Seeing how there’s limited functionality available and there is probably no support for this, I wouldn’t suggest trying to use it for production unless users are strictly using it for instant message.

ih have a same problem. A call from Lync to Skype works. A call from Skype to Lync does not work. Is there now a solution to the problem?