Although the project I’ve been on for a hospital has primarily been to test Citrix published applications with the Blackberry Playbook, we also took the opportunity to test with iPads whenever we had any problems with the Playbook to determine whether the issues was caused by the server or the tablet.  The latest problem we had was that we could not get any audio while access web pages or playing wav files through Citrix published applications with the Playbook via the Citrix Receiver.  After trying various troubleshooting steps without making any progress, we went ahead and took an iPad to test and noticed that it wasn’t playing any sound either.  After doing a bit of research, we noticed that certain users posted on the forum that one of the items to try with the iPad was to turn on the Audio Stream setting for the account: 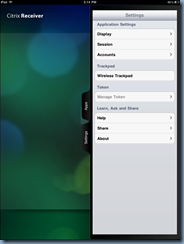 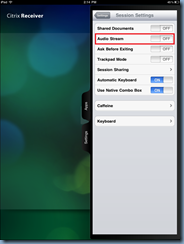 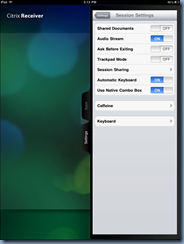 Once we turned on the Audio Stream setting on the iPad, sound began to play via the Citrix published applications.  What’s unfortunate was that we were unable to find this setting any where within the Playbook’s Citrix Receiver so we’re still looking into that issue.  A call was placed into Citrix and I asked the engineer whether he has gotten any Playbooks to play audio and he said yes.  I’m still waiting to hear back from him so I’ll update this post or write another one when I get a response.

Also, I find it sort of cumbersome to test audio via browsing to a website such as youtube.com from within a Citrix published web browser so the way I’ve been doing it is to published the Windows Media Player application as such: 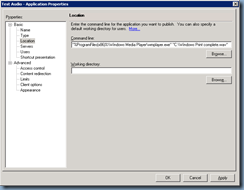 You’ll be able to play audio right away with this published Windows Media Player.