Getting function keys on Blackberry Playbook for Citrix published applications

After getting this workaround he’s been using from him, I went ahead and created a batch file named AS400FKey.bat with the following commands:

I then proceeded to modify the medical application’s Command Line under the Location node of the application settings: 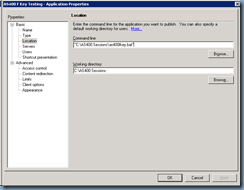 I confirmed that the new application is published:

Launched it on the Playbook and got the on screen keyboard:

Not the most elegant solution but the a valid workaround until someone rewrites this AS400 application’s GUI to include function key buttons.