For those who have come across my previous post about installing the Nexus 1000v:

… I noticed a nice change for the installer in the latest version: 4.2.1.SV1.4 (might have already existed in the earlier versions that I haven’t worked with).  As I mentioned in the post above, one of the problems that people might come across when deploying redundant Nexus 1000v VSMs is accidentally creating more than one DVS and orphaning one when you move one of the VSMs over to another DVS:

From here on, you have the option of deploying another VSM to configure them in HA. I would suggest that you do not go through the same wizard to deploy the second node as it will require another IP address and if you proceed with configuring the VSM this way, you’ll end up with 2 DVS on your vCenter. Once you go in and run the commands:

… to configure the 2 VSMs, you’ll end up with an orphaned Nexus 1000v in your vCenter and the process of removing it is only available internally at Cisco (I had to call today). What I would suggest is install the 2nd node by mounting the ISO and going through the CLI to add the 2nd node instead. See this guide: http://www.cisco.com/en/US/docs/switches/datacenter/nexus1000/sw/4_0/install/software/guide/install_n1000v.pdf

Note:  I did end up taking advantage of a call with Cisco and documented the procedures on how to uninstall the Nexus 1000v.  You can find this information in the following post: http://terenceluk.blogspot.com/2010/11/how-to-properly-uninstall-nexus-1000v.html

The good news about the new version is that even if you simply run the Deploy OVF Template… twice: 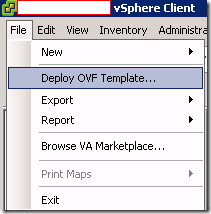 You’ll notice that you now have the new option: Nexus 1000 Secondary while going through the Deploy OVF Template… wizard in version 4.2.1.SV1.4: 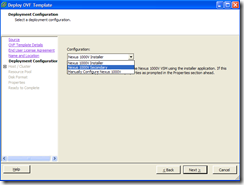 Where as if you were deploying version 4.0.4.SV1.3b you would not get that option: 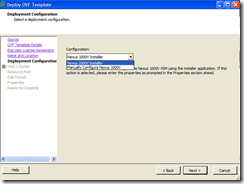 This is definitely a nice change to the installer that would prevent anyone who is not familiar with the deployment from accidentally deploying more than one DVS and subsequently orphaning one of them.