Can Microsoft Lync Server 2010 handle extensions that start with a “0”?

I took some time to complete my serious of tests with OCS 2007 R2 and the results were the same, yes you can do it.

I took this opportunity to try extension “0000”: 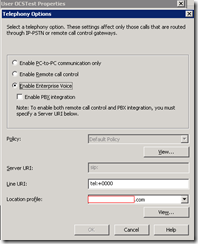 As shown in the following screenshot, I’m able to ring the user as well as answer the call (no screenshot for the latter but take my word for it):

As I indicated in my previous post, you’ll run into issues when you integrate this with Exchange UM so I would advise anyone to redesign their extensions if they intend on using OCS 2007 R2 or Lync Server 2010 for voice.