SQL Server 2008 Reporting services install fails with: “Input string was not in a correct format.”

One of the components I was scheduled to deploy at a client’s office required SQL Server 2008 Reporting Services and since I was semi-fluent with performing SQL installs, I went ahead and told the client that rather than waiting for his resources, I’ll go ahead and install SSRS.  I’ve done many SSRS installs in the past and was surprised when I ran into the following error:

The following error has occurred:

Input string was not in a correct format. 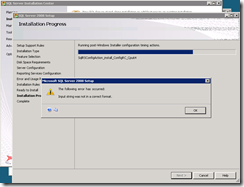 What’s interesting was that if you look into the services console, the SSRS services are there and started but it’s obvious that it’s half broken as you’ll find plenty of event ID: 113 errors logged: 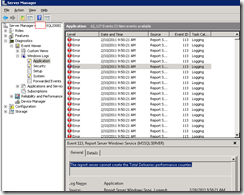 Doing some research on the internet showed that people have had success with the following KB: http://support.microsoft.com/kb/300956.  However, this appeared to be instructions for Windows Server 2003 and since the server I was working with was Windows Server 2008 R1, I dug a bit more and noticed this blog post: http://blogs.technet.com/b/yongrhee/archive/2009/10/06/how-to-rebuild-performance-counters-on-windows-vista-server2008-7-server2008r2.aspx.  I went ahead and uninstalled SQL Server 2008 Reporting Services then executed the following on the server:

From here on, I tried to install SSRS again and this time it installed without any issues: 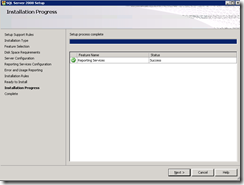 I was sort of glad I was using Windows Server 2008 as the operating system as the KB had many steps that needed to be done.  Hope this helps anyone out there who may run into this problem.