I received a call from one of our account managers yesterday in regards to a client’s question for Exchange Unified Messaging.  The radio stations here in Toronto have been talking about an impending snowstorm for the last 2 days and many organizations have been broadcasting email messages either telling employees they are allowed to work from home or the office is closed so they can take the day off.  While most organizations have resorted to sending out an email, we have a client that wanted to send a broadcast voicemail.  You’ve probably already guessed that when I was asked this question, I didn’t know what the answer was off the top of my head.  The account manager came from a technical background so he actually did a bit of searching and said someone said that you can enable distribution groups for Exchange UM.  I responded by telling him I’ve never seen such an option for distribution groups but perhaps I may be wrong so I quickly logged onto our internal Exchange 2007 UM server to take a look and from this screenshot:

I also logged onto another Exchange 2010 environment but the options were the same.  I told him maybe he read wrong and to send me the post and so he did: http://social.technet.microsoft.com/Forums/pl-PL/exchange2010/thread/487bbff6-8d46-445f-8e7f-e11c3d566c01.  After reading the thread, it looks like the user who replied did indeed say:

“Use the Directory Search and/or Personal Contact Search to add a receipient and/or a UM-enabled distribution group.” 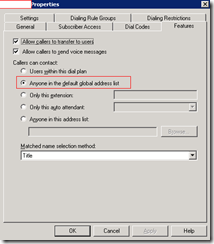 I’m familiar to his logic because of a scenario I’ve come across a while ago which I wrote about here: http://terenceluk.blogspot.com/2011/01/why-am-i-able-to-lookup-non-um-enabled.html but the dial plan I was testing with already had this option selected and I still wasn’t able to look up distribution groups.  I’m not sure if this is any different than Exchange 2010 but I didn’t have a chance to test it as I didn’t have an environment to use in the wee hours of the night.

I got a response from Microsoft the same day I wrote this post and was told that perhaps the gal grammar speech recognition and/or DMTF map wasn’t generated for these distribution groups (they aren’t by default) so I went and quickly checked one of the distribution groups I tested the forwarding with and found that the msExchUMDtmfMap attribute was indeed not set. 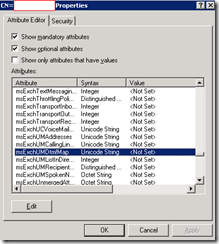 So the way to get them mapped is to use our trusty GalGrammarGenerator.exe executable with the “l” and “a” switches:

Note that you should be careful before doing this because if you generate entries for the gal grammar file as well as populate the msExchUMDtmfMap attribute for users and forget to set who the callers can contact properly, you’ll run into this problem: http://terenceluk.blogspot.com/2011/01/why-am-i-able-to-lookup-non-um-enabled.html

What I did notice was that the workaround that Microsoft provided appears to work as well:

Create an new user account to be used as a voicemail drop off box for broadcasting voicemails: 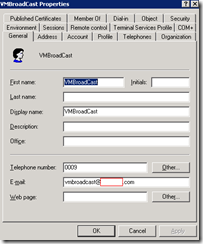 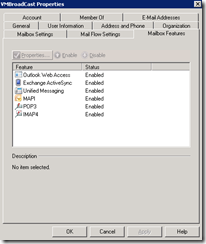 Note that enabling the account for Unified Messaging is optional depending on how you’re going to broadcast the voicemail.

If you are going to leave a voicemail in your own voice mailbox then if you allow users in your dial plan to lookup other users that are in the default global address book then you won’t need to enable this broadcast account for UM.  However, if you only allow users to lookup users who are in the same dial plan then you will need to enable this account for UM then place it into the same dial plan as the user you will be using to forward the message from.

If you are going to simply call into this voicemail broadcast account’s extension then you will need to enable it for UM.

If you want to call directly into this mailbox to leave a voicemail message that will get distributed to a distribution group then you will need to enable it for Enterprise Voice so you can call its extension.  If you just want to forward a voicemail via OVA (Outlook Voice Access), you don’t need to do this: 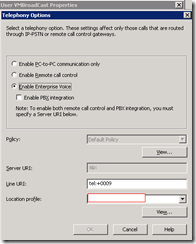 Configure broadcast account to forward emails to the distribution group of your choice: 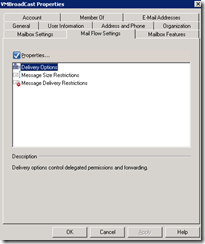 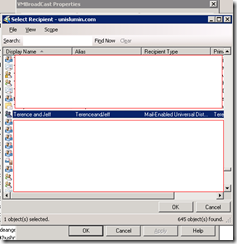 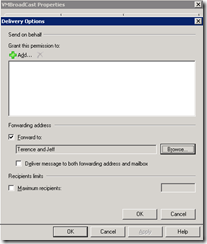 Make sure the distribution group has the members you’d like to the voicemail to be distributed to: 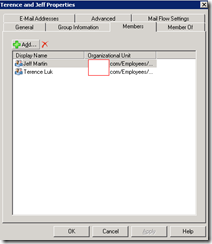 With this setup, you can either call the VMBroadCast account directly to leave a voicemail which will then be automatically forwarded out to users in the distribution group you’ve configured.  Once the voicemail is broadcasted, it will look something like this in recipients’ inbox: 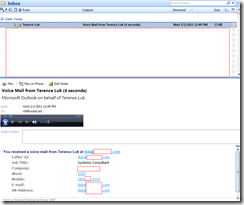 The example has the following properties:

Sorry, I know it might get a bit confusing but all the properties you see in the voicemail message above are showing the caller’s information.  What will also see is a reference to the account VMBroadCast in the To field which represents the caller Terence Luk calling VMBroadCast which was then forwarded over to the recipient.  I wanted to make this clear because some organizations might care what the To field has so be aware of this.

You can leave a voicemail for yourself, dial into your Outlook Voice Access and navigate through the prompts to forward the voicemail to the VMBroadCast account which will then be forwarded out to users in the distribution group you’ve configured.  Here’s what navigating the prompt with touch tone commands would look like:

As shown in the screenshot below, this voicemail message, unlike the one created with Option #1, is a bit different.  Notable differences are: 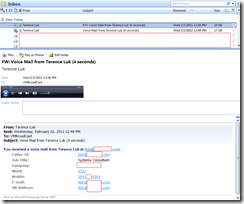 Here’s a side by side comparison:

Left is the forwarded voicemail, right is the direct voicemail left in a mailbox

So what would I suggest?  I prefer the direct message left in the voice mailbox as there is no FW: in the subject line and no confusing Microsoft Outlook on behalf of in the header.

As for choosing a distribution group to forward via OVA, if anyone knows what I did wrong, please feel free to comment on this post.  Thanks.

if only exchangeUM did as Cisco and allow you to record a VM though outlook...

Anonymous said...
This comment has been removed by a blog administrator.
December 9, 2015 at 6:21 AM

Long distance calls routed over Internet connections are now possible, thanks to Voice over IP. With huge savings in phone bills and easy calling, this technological breakthrough is ringing in the next generation in communication. voicemail voice over

I enjoyed reading your article :) PLease continue publishing helpful topics like this. Regards, from Let's get gadget, a company whose into selling
cordless phone answering machine