I received a call from a colleague today asking me to look at a problem he had with accessing the KVM Console of a new Cisco UCS B series deployment we’re currently a part of.  The following illustrates what happens:

He makes an attempt to access the KVM Console of a blade through UCSM: 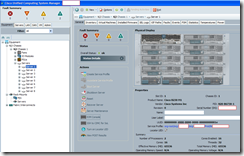 Once he clicks on the KVM Console link, Java launches as it usually does:

The Connecting to KVM Server window pops up as it usually does:

Shortly after the Connecting to KVM Server window closes, he receives the following error:

Note: Results are the same when he uses KVM Launch Manager.

Since I was a part of this project as well and was familiar with the complex networking setup (it’s a mess because it’s set up temporarily at a staging lab), I knew it was probably a routing issue.  The way he was accessing the KVM Console of the blade was through a VPN into a network (172.20.13.x) and from there, he’d have to access UCS Manager through a published IP (172.20.5.x) through a router that NATs to the 6120’s management IP (10.21.x.x).  In the case of this setup, there was no way for him to get to the 10.21.x.x network because there’s no route to that network.  Those who are familiar with UCS and how you access the KVM Console know that if the workstation you’re trying to access the console cannot reach the blade’s assigned management IP then you won’t be able to open up the console.

So what I ended up doing was telling him to access UCSM through a management server that was actually on the same subnet as the 6120’s management IP.  Note that this is only one of the many reasons why you would see this error message so if this doesn’t apply to your situation, the takeaway is that you should check your network configuration and be sure that your workstation can actually get to that network.

I'm having a problem where I am on the same subnet, however, it appears that a previous KVM session was disconnected and now a shared session is required. Problem is, the original session has no way of accepting the share request. I receive the shared error when going via the KVM launch manager and the exact error you've shown when via the UCSM.

If you want to connect from different subnet then try this :

it is enough but keep your mind following server ports and their default port numbers these are using between client and ucs manager: