Can Microsoft Lync Server 2010 handle extensions that start with a “0”?

I think what I like most about getting into the voice world 2 years ago was that I’ve been able to come across interesting legacy PBXs and when I say interesting, I mean extension designs.  I won’t go into the details about all of the interesting designs I’ve seen but one that I ran into a few months ago was with a Nortel pre CS1000 PBX (whatever the version was called before CS1000).  The extension design had multiple length extensions in the dial plan as well as extensions that started with a 0.  As the title indicates, this lead to the whole conversation about whether Lync Server 2010 can handle extensions starting with a “0”.  I was told by the university that they tried and failed with OCS 2007 R2 (I’ll test that out soon) because the 0 gets dropped.

I took some time to ask this question on our Microsoft Partner Forums and was told that Lync does support it and while it’s not that I don’t trust them, I’m the type that would like to see it myself.  Fast forward to a few months later, I finally got some time at night to test this out and yes, it does work.

Lync User2 is configured with extension 0123: 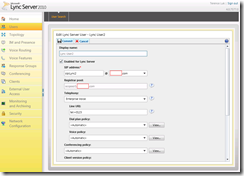 Here’s what the Snooper logs look like as the call initiates and establishes: 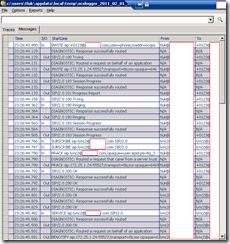 Although I’ve confirmed that Lync Server 2010 does indeed handle extensions that start with a 0, if we ever went ahead to go with this, we’ll will definitely have problems with Exchange UM even though it also excepts extensions that start with a 0 (confirmed with Microsoft and tested it myself with users assigned a 0000 and 0001 extension), certain prompts have 0 mapped to the operator’s extension.  There is a way to get around this to direct a user to a prompt that is setup for dial by extension but this doesn’t solve all the other problems that we’ll encounter.

While this doesn’t really help us at all, I’ve already indicated that a redesign of the extensions according to best practices is needed and I don’t intend to trying to work around this as I’ll most likely run into even more problems.  Quite interesting and it reminds me of the time when I was doing Active Directory work for an auto company that used underscores for their computer names.

Hi,
Your Articles on Lync Server are really very nice and are helpfull. One thing i want to know on Lync Server, when we configure a Response Group with 2-3 Agents. If someone from Outside the company want to reach a user who has only extension can he be reached directly without agent attending the call.

I've re-read your question a few times but don't really understand what you're asking.