There is a way to prevent users from accidentally ejecting their network adapter but I haven’t figured out a way to configure VMs in bulk.  See the following post for more information:

I’ve recently experienced a strange phenomenon in VMware View 5.0 with vSphere 5 where a user inadvertently ejected the network adapter which in turn caused the network adapter for the virtual desktop to disappear.  Before I demonstrate this, let me provide a bit of a background for the environment:

This environment has several users who connect their smartphones to their virtual desktops to download photos and once the files are retrieved, they proceed with ejecting the USB device representing their phones.  One of the users recently was performing this operation but inadvertently ejected their vmxnet3 ethernet network adapter card as shown in the following screenshot: 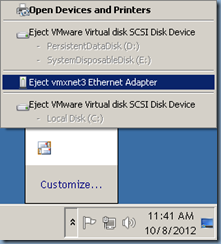 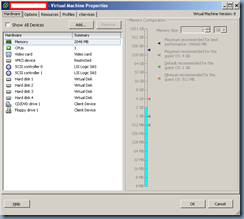 What’s strange is that I replicated this issue and noticed no tasks being logged in the Recent Tasks window within vCenter.

I’m currently planning to upgrade both the vSphere and View environment and will repeat this test again at a later time.

You can try disable Hot-Plug
http://kb.vmware.com/selfservice/microsites/search.do?cmd=displayKC&docType=kc&docTypeID=DT_KB_1_1&externalId=1012225

If using VMware View a "quick" fix is to refresh the VM using the VMware View Administration console. This will reset the VM back to your default state (i.e. NIC installed). Of course, the hot-plug is a more permanent fix.