Though this isn’t much of a surprise but I noticed that whenever you make a change for the SQL store under the Associations section for your pool in Microsoft Lync Server 2010’s Topology Builder, a new node representing the created SQL store will be created. 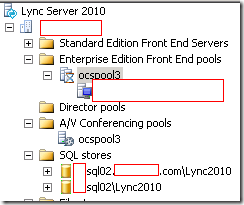 This means that if you’re troubleshooting an issue during the initial setup and end up changing the SQL store multiple times then back to one that you’ve used before without deleting the it from the Lync Server 2010 tree, you’ll end up getting the following error: 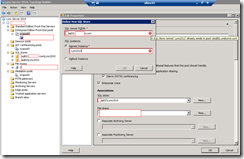 Also, if you try to delete a SQL store that’s currently assigned to a pool, you’ll receive the following error message:

This SQL store is being used. Remove the dependencies before deleting the store. Affected services:

Yes, it’s not exactly that complicated or surprising but in case anyone new to Lync is wondering why they see these errors, the reasons outlined are why.