I ran into an issue a month ago while configuring a Cisco UCS C210 M2 server with a LSI MegaRAID controller where the mouse and keyboard would become non responsive as soon as I get into the WebBIOS utility. 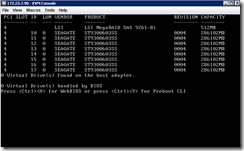 After hitting Ctrl-H in the screen above, I would have a non responsive keyboard and mouse: 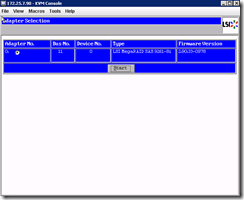 I had limited time to troubleshoot the problem because of my schedule so I went ahead and posted a question on the Cisco forums: https://supportforums.cisco.com/message/3255131#3255131

Has anyone experienced having their mouse and keyboard not being responsive when they get into the LSI MegaRAID configuration screen after hitting Ctrl H?  I noticed that the keyboard and mouse doesn't respond when I use the console cable so I went ahead and setup CIMC with an IP so I can launch the KVM console from remote but I still get the same problem.  I've already tried updating the firmware from 1.2a to 1.2b but still can't seem to get it to work.  The attached screenshot is where the mouse and keyboard becomes non responsive.

The response I received from another community member was the following:

Also try to toggle the "Legacy USB Support" option in the BIOS.

Update: I just took some time over the weekend to try disabling “Legacy USB Support” with the new firmware that’s installed and it looks like it does indeed cause the mouse and keyboard to become non responsive in the WebBIOS utility.  I guess I remembered wrong about toggling it during the troubleshooting process.  In case anyone is wondering, the reason why I disabled it is because of the problem in the following post: http://terenceluk.blogspot.com/2010/11/vmware-esxi-410-stuck-at-initializing.html

I’ve tried toggling the “Legacy USB Support” already without any luck and while I tried updating the CIMC firmware to the latest version at the time to 1.2(1b), I didn’t try updating the BIOS.  By the time I got some time to look at this problem again, a newer version of the CIMC and BIOS was out so I went ahead to update them and it ended up fixing the problem.  I’m not sure if this is a common problem or not but I suspect it isn’t because many more other users would have experienced this but just in case a select few run into this strange behavior, I will list the information for the firmware I had problems with and firmware version that ended up fixing the problem.

Firmware version I had this problem with:

Firmware version that fixed the problem: 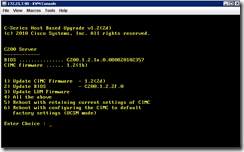 My guess is that my problem had less to do with the firmware version but more so with something else that was changed after the firmware was updated.  I doubt I’d really find the root cause of this but I’m glad it’s fixed as it was always at the back of my head even when I was laying on the beach during my vacation. :)

Had a similar issue with B230M2s on UCS 3.1 (3e) Tried different java versions to no avail and then I found your post. This got it working! Thanks!