I’ve been tackling a RAID issue on one of the new Cisco UCS C210 M2 servers we’re adding to our production environment and since I’ve ran out of options, I thought maybe I should try updating the firmware.  What I noticed was that no matter which firmware ISO I downloaded from the Cisco download site:

… I would not be able to get it to boot over the console KVM through CIMC as I would never see the option of booting from the virtual CD/DVD device:

What was interesting was that I tried to mount a Windows Server 2008 ISO and the screen does show the virtual CD/DVD device as being an option:

A ESXi 4.1 ISO also doesn’t have this problem and since I wasn’t in the office that day, burning a CD or DVD wasn’t an option so I began trying everything I could think of:

Didn’t work:  Unblocking the file before I tried mounting it. 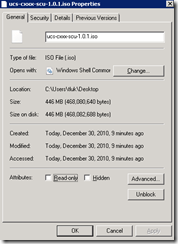 Didn’t work:  Tried to mount the Windows Server 2008 ISO so that the virtual CD/DVD device would show up then map the firmware update ISO to try and boot from it.

As I began running out of options and annoyed at the hours I’ve spent troubleshooting this (these servers take forever to reboot), I sat back and thought about what I’ve changed in the BIOS on this server that I haven’t done on the previous servers I’ve updated and after a few minutes of thinking, I realized I’ve disabled the Legacy USB Support in the BIOS because it’s a known issue that ESXi 4.x will have problems booting up if it was enabled. 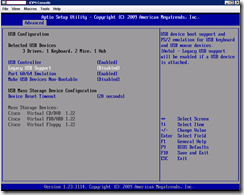 I went ahead and re-enabled it: 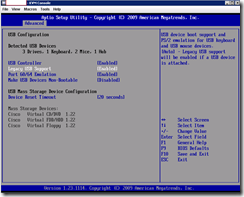 Tried booting from the firmware ISO and long behold:

As it finally booted into the firmware update Linux kernel, I said to myself: “Who would have thought this legacy USB support would only affect these Cisco firmware update ISOs.”

Thanks for this. I had the ESXi installer hanging with legacy USB support enabled, so the Cisco SE I was working with told me that disabling it was a known workaround. Of course, as soon as I did that I couldn't boot the install image.