Connecting to a VMware View 5.0 virtual desktop with PCoIP disconnects after a few seconds of a black screen (RDP works)

I encountered an interesting issue last night while trying to migrate a user from a linked-clone desktop over to a full dedicated virtual desktop due to some software licensing restrictions and the following are the steps I took:

What I immediately noticed was that when I used the VMware View Client to access the desktop, I would see the client connect but then I’m presented with a black screen which lasts for a few seconds before I was disconnected.  Browsing through the event logs didn’t really help as I only saw 3 warnings logged:

Unable to open process token for self 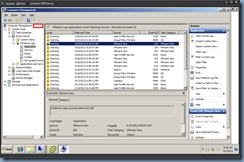 What’s interesting was that if I switched over from PCoIP to RDP as the protocol for the connection, I would be able to connect without any issues.  None of the other virtual desktops in the other pool exhibited this problem and all of the desktops were on the same VLAN which meant this wasn’t caused by PCoIP ports being blocked.  Reinstalling the View agent on the desktop didn’t seem to help and just as I began thinking about rebuilding a new image, I thought I’d try reinstalling the VMware Tools on the virtual desktop and to my surprise, this corrected the problem.