Attempting to RDP to a server with Remote Desktop Connection hangs when using a Citrix XenDesktop 5.6 persistent virtual desktop on an HP thin client with HP ThinPro OS

You’re logged into a Citrix XenDesktop 5.6 Windows 7 virtual desktop and try to remote desktop over to a server and encounter the following: 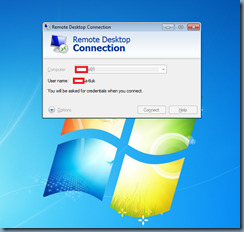 You do not experience this with another pool with the same operating system but configured as a pool with personal vDisks.  You also notice that this does not happen if you swap out the ThinPro thin client with a Windows 7 Embedded client.

This was definitely one of the stranger issues I’ve encountered with virtual desktops as the problem did not occur until I swapped out a user’s Windows 7 Embedded HP thin client for one that had the HP ThinPro as the operating system because we had issues training certain users that CTRL-ALT-DEL was now CTRL-F1.  As soon as I went ahead and swapped out the thin client, the user told me that remote desktop no longer worked for him and the connection appear to continuously loop because the application doesn’t look like it has hung but rather waiting for something to happen.  I noticed immediately that this was consistent between the desktops in the same Existing pool (this pool used to be Dedicated prior to our vCenter migration) when I logged on with my desktop from the same pool.  One of the other things worth noting is that I that this did not seem to be a problem when I logged onto a desktop from another pool that was configured for Personal vDisks.  After doing a bit of research and reading through forums, it looked like some users had luck by disabling the Smart cards setting in the RDC application: 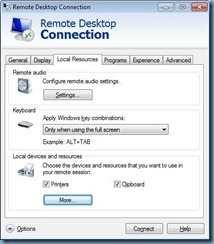 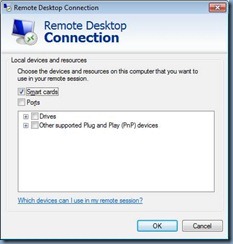 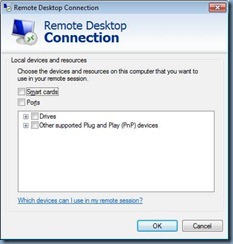 … but this did not fix the problem for me.  Another suggestion other users made was to stop the Citrix Smart Card Service but this service wasn’t one that you could simply stop it in the services console: 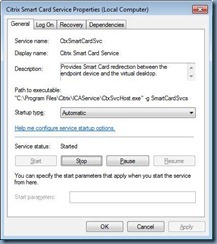 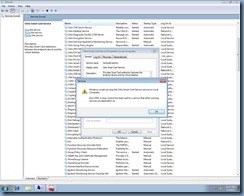 What I ended up doing was simply disabling the service and initiated a restart of the desktop which allowed me to boot the Windows 7 operating system with the Citrix Smart Card Service stopped: 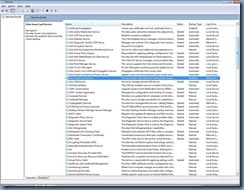 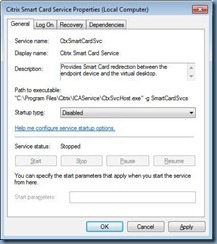 Once this service was disabled, I was now able to use RDC to RDP to servers without any issues.  Definitely a bit bizarre but since we don’t use smart cards and most of our users were on pools configured for PvDs, we just went ahead and disabled this service for the rest of the desktops.