Ran into a strange issue while performing a routine patch night on a Citrix XenApp 6.5 server with no patches.  The patch I was installing is supposed to fix a pass-through authentication issue but as I rebooted the server after installing the hotfix XA650W2K8R2X64001.msp because it was required, the server would get stuck in the Shutting Down state.  After waiting 20 minutes with no indication that the server was going to shutdown, I had rebooted it.  Once it came back up, I noticed that RDP sessions over to the server would immediately cut off.  I would see the connection get established but almost instantly cut off and revert back to the RDP client: 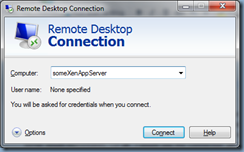 I checked the RDP listener, ran netstat to ensure the svchost.exe service was listening on port 3389 and nothing really popped out at me.  Since it would appear that the patch caused the RDP to stop working, I went ahead and uninstalled it but that still did not correct the problem.  Reinstalling RDP services crossed my mind but I remember it being a disaster when I did it last time on a XenApp 6.5 server.  Another idea was to delete the RDP listener and recreate it as I’ve done something similar before but that prior experience was not a XenApp server so I decided not to.  The event logs did not have any errors or warnings pertaining to this and seeing how I had no snapshot created prior to the patch, my last hope was to disable and re-enable RDP.  So I proceeded to disable RDP: 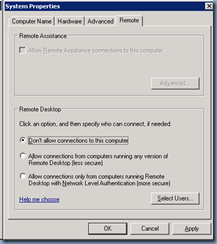 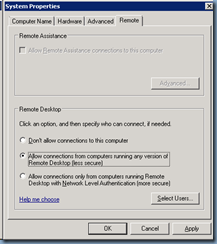 … and RDP began working.  Once I got RDP going again, I went ahead and reinstalled the patch and while RDP does connect but it gets stuck at the following screen:

After a few minutes, it gets cut off:

Not too promising.  From here, I went back to the console and tried to log in but the server was unresponsive when I send CTRL-ALT-DELETE.  Since it didn’t look like I was going to be able to log in, I used the VMware console’s Restart Guest feature to try and restart it but that too didn’t seem to do anything.  Just as I thought the server had hung and was going to hard reset it, the server started shutting down.  Once it came back up, I was able to RDP to the server and proceeded with installing another hotfix (XA650W2K8R2X64014.msp).

Definitely a strange experience and it’s worth noting that I did not experience the same issue when I installed the hotfix on the second XenApp server.