As with one of my previous posts:

… I’ve been trying to keep track of the cmdlets I’ve been using to make my life a bit easier while configuring XenApp and XenDesktop farms and since I have cmdlets scattered around in different notes, I thought it would be a good idea to consolidate them into a blog post that I can reference to again in the future.

List all desktop catalogs and their information and pipe to file:
Get-BrokerDesktopGroup > C:\XenDesktopCatalogs.txt

List only the name of applications based on Name with a wild card:
Get-BrokerDesktopGroup -Name Windows*7* | format-list name

… and if you want to use other variables, you can review the attributes available via the

… which outputs information similar to the following: 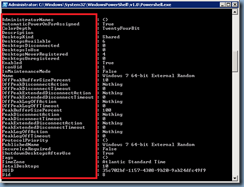 I’ll append to this post as I find more in my notes.

Hi, is there a way to configure single XenDesktops or groups by Powershell, like increasing CPU, memory or disk space?
That would be nice to know. Thanks!