Having worked with Microsoft Exchange 2000, 2003, 2007 and finally 2010, I’ve come to appreciate what Microsoft has done and how mature Exchange 2010 PowerShell cmdlets are today.  There really isn’t a whole lot you can’t do with the cmdlets and while most administrators including myself probably only use 5% (if even) what it’s capable of, I know if I needed to automate a task that the GUI doesn’t allow you to, PowerShell will be able to do so.  Now moving onwards to Citrix, it’s great that they have adopted PowerShell but I find that it still needs a few iterations before it’s as powerful as what PowerShell does for Exchange.  Anyways, I digress.  The following are just some of my Citrix PowerShell notes that I’ll continue to build towards as I develop my toolkit for Citrix XenApp.

List applications based on BrowserName with a wild card:
Get-XAApplication -BrowserName Microsoft*

**Note that Enabled is the checkbox here: 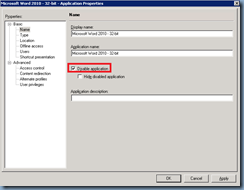 Alternatively, you can use another variable such as HideWhenDisabled: 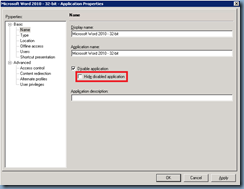 … and if you want to use other variables, you can review the attributes available via the

… which outputs information similar to the following: **Note that the above command will overwrite the permissions currently set for the applications.

I’ll append to this post another day with more modifying cmdlets.

This is great! Thanks for the examples!