Ran into an interesting problem last month when I noticed that members belonging to distribution and mail-enabled security group no longer receive e-mails after transitioning their Exchange server from 2003 to 2010.

You’ve noticed that users who belong to distribution groups no longer receive emails sent to those groups so you open up the Message Tracking tool in the Exchange Management Console:

The delivery report shows the following:

8/25/2011 3:36 PM contcas01.contosonet.com
Message delivery is taking longer than expected. There may be system delays. For more information, contact your helpdesk. 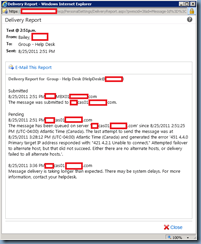 A quick look in the Queue Viewer shows the following details for the message that is stuck in the queue:

The last error reported for the message reads:

You open up the problematic distribution group’s properties, navigate to the Membership Approval tab and see that all of the radio button options are grayed out: 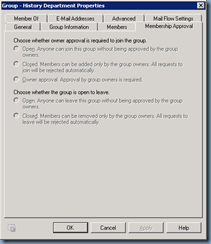 Andy Olson actually blogged about this strange behavior in one of his posts: http://blogs.pointbridge.com/Blogs/olson_andy/Pages/Post.aspx?_ID=13 and because he mentioned that some of his customers had issues if they didn’t upgrade the groups, I thought maybe the issue I was experiencing was related to these Exchange 2003 migrated groups as well.

Since the environment I was working on had quite a few distribution groups, I went ahead and used the cmdlet in PowerShell to upgrade them all at once:

You’ll notice that the screenshot above throws quite a few errors and warnings and the reason why is because the environment I was working on had distribution groups with alias’ that had spaces in them.

Notice in the screenshot below that the Exchange 2003 migrated distribution group on the right still referenced the old Exchange 2003 mailbox server:

Go ahead and remove it as shown below:

Once you’ve completed this for the problematic distribution groups, the members belonging to them should start receiving the queued up mail.  The following is the tracking I immediately performed after upgrading the distribution lists:

There is no harm to execute the cmdlet to upgrade the distribution groups again because you will be warned that no changes were made.  I recommend running it again just as a sanity check:

Hope this helps anyone out there who may experience this issue.