You’ve received complaints from users that they are unable to successfully launch Citrix XenApp 6.5 published applications because while the Citrix Receiver launches and attempts to connect to the XenApp server, it hangs at the:

… stage for a few minutes and eventually disconnects.  Attempting to directly remote desktop to the server exhibits the same behavior: 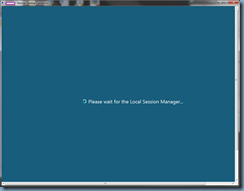 … but you are able to eventually log into the server.

The users experiencing this problem are already a part of the Remote Desktop Users group and you noticed that this issue goes away if you were to grant the user local administrator permissions.

One of the first hits I received while Google-ing the issue was a Microsoft KB that supplied a hotfix:

Unfortunately, this applying this hotfix did not correct the issue.  The next search result was the following thread on the Citrix forums:

… which showed that users had mixed results with 2 other solutions:

Several users has had luck deleting the usrclass.dat hidden file from the directory:

… so I went ahead to delete it and restarted the XenApp server but noticed that this did not correct my problem.

Another solution proposed by a Citrix engineer was to remove the Users permissions to a file named TSTheme.exe that was located in the directory:

Note that the file is owned by the TrustedInstaller group so you will need to take ownership over the file in order to remove the permissions: 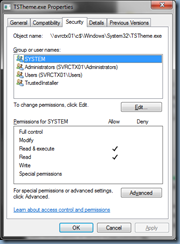 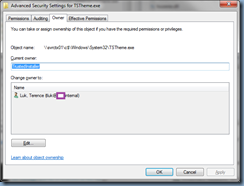 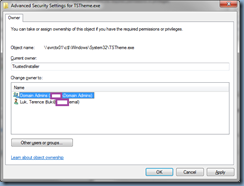 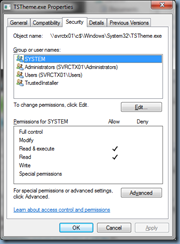 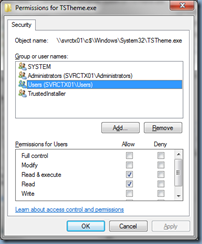 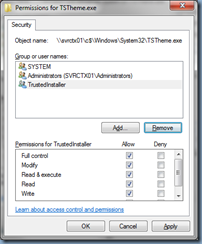 Once the Users group was removed, users who were not a part of the local administrators group on the XenApp server no longer had to wait for minutes at the Please wait for the Local Session Manager… stage and we’re now able to launch applications through the Web Interface portal.