You’ve received complaints from various users that when they launch applications published on the Citrix XenApp 6.5 servers, they receive Windows Script Host error prompts similar to the following:

To further troubleshoot, you proceed by configuring the XenApp server to allow users to directly remote desktop to the server.  Upon directly logging onto the server with the user’s credentials, the following is displayed: While troubleshooting the issue, you also noticed that you are unable to browse the path: 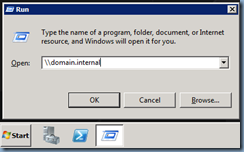 For more information about permissions, see Windows Help and Support

The server also exhibits the same behavior when you browse directly to a server via the name or IP:

What’s strange is that you are able to ping other servers:

You notice that if you add the user to the local administrators group, the error goes away.

While the symptoms described in the following KB:

… did not directly map to the ones described above, I found that the solution was resolved my issue.  The reason why non local administrators were experiencing these symptoms is because of the UsrClass.dat file located in the following directory when the user is logged onto the server:

You will also notice the same file stored on the file server that stores the user’s profile management folder:

The solution as described in the article is to delete this file but note the following: