Citrix XenDesktop 5.6 virtual desktops continuously prompts the message: “You must restart your computer to apply these changes”

You’ve completed a new build of a Windows 7 master image desktop for XenDesktop 5.6 and proceed with creating the new desktop catalog and add the desktops to a desktop group.  Once the desktops have been deployed, you continue by connecting a desktop in the pool but noticed that you receive the following prompt with the following message:

You must restart your computer to apply these changes

Before restarting, save any open files and close all programs. 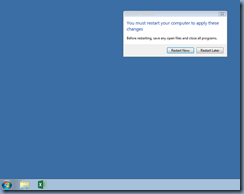 You’ve confirmed that your master image does not prompt you for a restart but noticed the desktops in the pool always do.

This issue was new to me because throughout all of the deployments I’ve done with XenDesktop, I’ve never encountered this.  The only difference between this deployment and all of the others is that this one is built on vSphere 5.1 with vCenter build 947673 and ESXi build 1065491 hosts (my previous deployments are either 4.1 or 5.0).  A quick search on Google reveals the following Citrix KB:

Case Study: MCS-Created Windows 7 VDAs Display 'You must restart your computer to apply these changes' Error Message when Starting
http://support.citrix.com/article/CTX132721

While the environment described in this article does not directly match mine (especially because the hypervisor is Microsoft Hyper-V 2008 R2), I went ahead and tried using the instructions to see if it would correct my problem.  The following are the steps I performed:

One of the unexpected behaviors I noticed was that I did not receive a prompt asking me to restart after adding the identity disk to the master image but I can confirm that after performing these steps, the desktops in the pool no longer prompted me to restart the desktop as if it had found and installed new hardware. 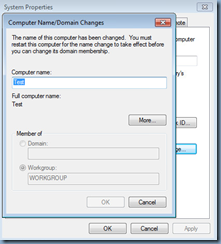 What makes it more strange is that if I change it back to the same name as the desktop that I used the identity disk and reboot, the option will be available again: 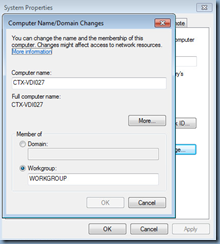 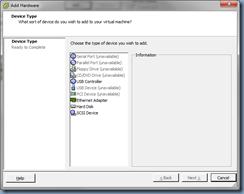 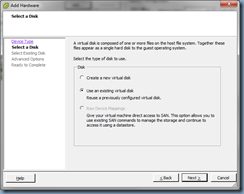 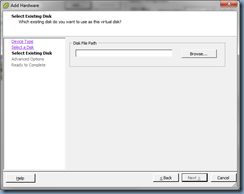 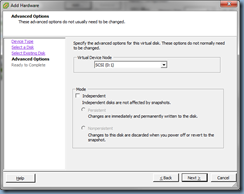 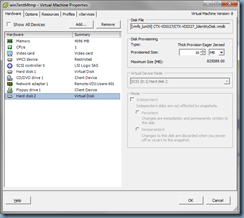 I continued by clicking OK to apply the changes, went to the console of the master image to confirm that identity disk shows up and then went ahead to remove the disk from the master image: 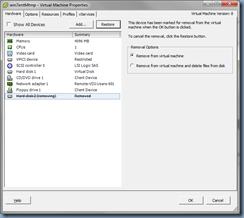 Once the disk was removed, I restarted the master image a few times, created a new snapshot then updated the desktop catalog.  Once the update to the base disk was complete, I noticed that the virtual desktops in the pool no longer prompted for a restart as if new hardware was found and installed.