You attempt to prepare the forest of your Active Directory for Lync Server 2013: 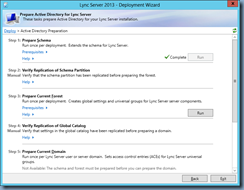 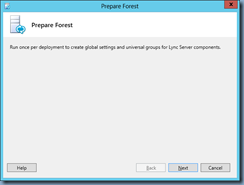 … but the step fails with: 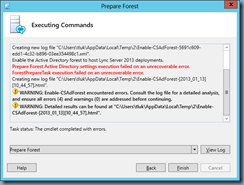 Error: Existing universal groups were found in "CN=Users,DC=domainName,DC=internal". Specify where to create new Lync Server universal groups explicitly at the command line with the GroupDomain parameter.

There are probably more than one reason that could cause this issue but the top searches via Google suggest that this happens when the Lync Server universal groups get moved out of the default Users container:

After validating that all of the groups were never moved from the default Users container, I went ahead and re-ran the forest prep wizard but this time entered the domain FQDN: 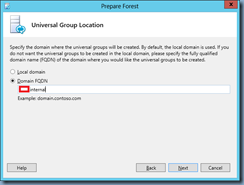 … which lead to the preparation successfully completing without any errors: 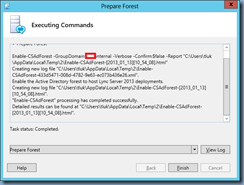 The environment I was working with has only 1 domain in 1 forest so I’m unsure as to why I had to specify the domain but since I was in a rush to move forward, I’ll see if I can come back to this at a later time to determine the cause.

As previous posts, this is one more good explained and helpful!

The first link you posted resolved my issue... Thanks Terrence.