VMware vCenter Converter fails with the error: “FAILED: Unable to find the system volume, reconfiguration is not possible.”

You use VMware vCenter Converter to convert a virtual machine and notice that it fails at 98% with the error message:

FAILED: Unable to find the system volume, reconfiguration is not possible.

The reason why you’re experiencing this error is due to a problem with the boot.ini file.  The situation that I ran into recently was because the server I tried to convert didn’t have a boot.ini file but through some searches on the internet, it looks like most people simply have certain lines in their boot.ini file that are not properly formatted.  The following VMware Communities post is an example: http://communities.vmware.com/thread/218684

After realizing that the server I had problems with was actually missing the file (see the following screenshots): 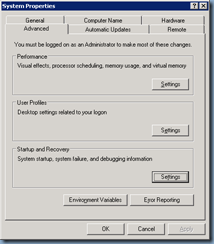 The C:\boot.ini file can not be opened. Operating System and Timeout settings can not be changed. 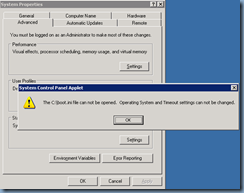 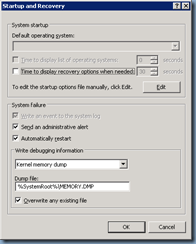 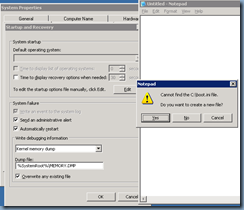 VMware has a KB article that mentions this type of error:

I was also able to find a Microsoft KBs that talked about the boot.ini file for a Windows 2003 server:

How to manually edit the Boot.ini file in a Windows Server 2003 environment

… but wasn’t able to find another one that explained each parameter in detail.  After doing a bit more searching, I was able to find the following webpage that contained more in depth details about the parameters:

Additional information and help with the boot.ini.

The parameter I was interested in was the partition because I knew it was the parameter that defined which partition, if there were multiples, was the operating system partition.  In the case of the server I had issues with, my partition was 1.

So I took a boot.ini from another server with multiple partitions and changed the partition parameter from 2 because the other server had the OS installed on the second partition to a 1 as such:

Once I made created the boot.ini file, the Default operating system: field was no longer blank: 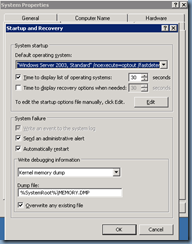 I proceeded to reboot the server once to ensure that the server boots fine (and it did) then continued to convert the server and the operation completed successfully.