I received an email from a client who was trying to install Windows Server 2003 Enterprise 64-bit on a Cisco UCS B Series B230 blade with the following error message during the install:

A problem exists with the .SIF file on the manufacturer-supplied disk: 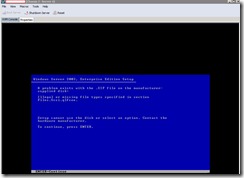 The administrator indicated that he had used the qlogic driver from the folder:

Since I knew the environment was deployed with B230 blades with the M81KR (Palo) mezzanine card and that the folder path indicates he used the M71KR (Menlo) drivers, I replied asking him to locate the proper Palo driver.  I didn’t get to see the install myself by when I followed up a few weeks later, they said that the M81KR driver worked.

We had the same problem...found out from Cisco that the Palo card is not supported under Windows 2003 R2. So we ordered a replacement Menlo card...now getting the same error?????

I also heard about the Palo card's driver not being compatible with certain versions of 2003 R2 so I'm not surprised. As for the Menlo card, have you contacted Cisco about this?