Being fresh on the Bermuda island and spending most of my time trying to get settled in, I was starting to itch for some work that excited me and while I have yet to be assigned to a large project, I did end up getting assigned to a client who was experiencing sluggish performance on their vSphere environment.  When I arrived on site, the first thing I did was have a look at the infrastructure they had: 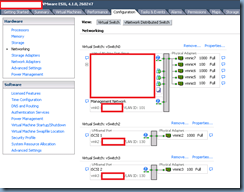 I personally didn’t feel that the vmnic setup was done in the best way possible but that wasn’t the priority because there was obviously something wrong with connected speeds of the vmnics.  What made it even worse was that one of the vSwitches configured for storage was connected at 100Mbps.  Since all of the ports are 1Gbps, the first thought I had was that either:

2. The ports on the physical Cisco 3750 switches configured in a stack were hard coded at 100Mbps.

As I reviewed the settings in ESXi and asked one of our network engineers to look at the port settings on physical switches, we found that certain ports were on auto negotiate and certain ports were hard coded for 100Mbps.  Further review on all the ports on multiple switches and all the ports on all of the ESXi hosts, we noticed that there was no pattern consistency in the configuration.

After plowing through all the configuration we can think of and making sure the ports were configured as per VMware’s KB and not going anywhere, we called it a day and I decided to post on the VMware forums.  The post can be found here: http://communities.vmware.com/thread/309372

… the person that respond ended up giving us an idea to look at and it was the cables.  I faintly remember asking who did the cables and as it turns out, of all the cables connected to multiple patch panels, there was one section that was crimped by the client themselves.  Since we were out of options, I went ahead to ask the client to order a professional manufactured cable that was long enough to run from the server over to the Cisco 3750 switches.  It took a few days to get there but when we finally go them, we went back in to test and long behold the NICs began connecting at 1Gbps almost immediately. 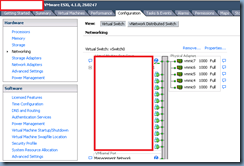 I’d have to say that this is probably the first time I’ve ever come across such a problem but it was well worth the frustration while troubleshooting.  This also reminds me of a time when my practice lead from my previous employer told me that there was this one project where he saw a 1Gbps NIC connect at 100Mbps half duplex and that was because someone managed to use an RJ-11 for connection.

The cables have since all been pulled: 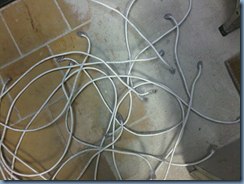 … and replaced by certified cables: 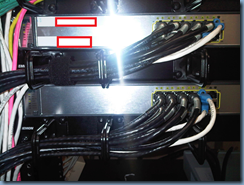 Hope this helps anyone that may possibly run into this issue in the future.

Holy S*1t, hours of frustration, I tried a different cable and it worked! unbelievable, cheers for this!

I recommend setting the duplex/speed to auto/auto. there are very few instances when you you need to hard set duplex or speed.