Attempting to delete an Exchange Server 2016 mailbox database previously used to migrate public folders from Exchange 2010 throws the error: “This mailbox database is associated with one or more active PublicFolderMailboxMigration requests…”

After ensuring that there were no Public Folder Mailbox Migration requests by executing the Get-PublicFolderMailboxMigrationRequest cmdlet, I did a quick search on the internet and found the following post: 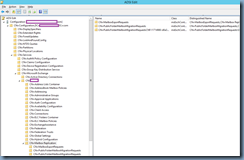 The node that appeared to be out of place was the one named:

Browsing into that node displayed the following items:

Opening these items showed that they were objects that corresponded to the day I had started the migration batch for the public folder migration so I went ahead and deleted these items in the folder then forced replication via repadmin /syncall /AdeP on a domain controller and was then able to delete the mailbox database.