Finding a virtual machine in VMware vSphere by the MAC address

I recently had to troubleshoot an issue within a Citrix XenDesktop environment hosted on VMware vSphere 5.1 where one of the DDC (Desktop Delivery Controllers) appeared to have an IP conflict with another VM: 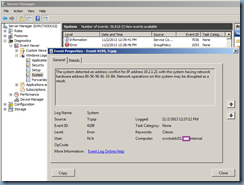 … I get the following result: 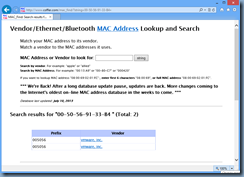 Great, it’s a VMware device and I have over hundreds of VMs hosted.

As there isn’t a way to list VMs or search via MAC addresses in the vSphere Client, I had to resort to using PowerShell.  I’m not much of an expert with PowerShell cmdlets since I don’t really use them on a daily basis so I dug up one of my old posts:

… which gave me the cmdlet:

The cmdlet gave me a starting point to

Unfortunately as shown in the screenshot above, this cmdlet gives me all of the network details of the offending VM but not the name of it.  The way around this is to use the Format-List (or FL for the short form) cmdlet to list all of the properties for the VM including the name as shown here: 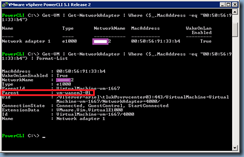 Note that the name of the VM is the value for Parent.

Thank you very much for this post!
It help me a lot!!

Worked perfectly for me - found a VM that had a different name than it's DNS name. Thanks for the post!

Thanks a lot for posting this!
It helped me a lot.

Appreciate the article. It was quite helpful.

I resolved the issue also from a different angle:

since both commands pointed to the same VM I knew who to blame :D

Definitely a great article. We had this problem in our lab and were going in Circles.
Thanks for putting it together.