I recently had to test the physical desktop desktop catalog option in Citrix XenDesktop 5.6: 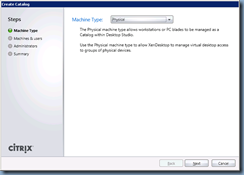 … for a client as they were interested in seeing if it was an improvement to their current method of using RDP through VPN and I thought it would dump my notes into a blog post in case I ever needed to refer to them.

One of the immediate changes that happens to a physical desktop when the Citrix VDA agent installed is that the Citrix virtual desktop agent replaces the ATI Radeon HD 2400 Pro display adapter: 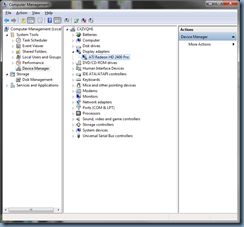 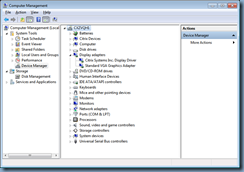 I noticed that this immediately caused an issue with the physical desktop because the Citrix XenDesktop agent’s video driver does not appear to display dual monitors when you interactively log on to the physical desktop from the desk.  Opening the Screen Resolution administration console on the Windows 7 desktop shows that only 1 monitor was detected and therefore the second monitor was projecting the same image as the primary monitor.  I tried playing around with the configuration parameters but couldn’t get the second monitor detected.  This single monitor detection does not appear to affect the XenDesktop experience as the Citrix video driver does a great job with displaying multiple monitors for users connecting via the Citrix Receiver.

Another small issue I noticed with dual monitors was that if you connect via XenDesktop to the physical desktop with dual monitors, drag a window to the 2nd monitor, maximize the window, log on via the console of the physical desktop reverting back to a single monitor, the maximized window in the 2nd monitor won’t automatically get brought back to the single main monitor.