I recently ran into an extremely strange issue at a client’s environment that a VMware support engineer never managed to resolve and it was only by chance that I was able to figure out a workaround.  The likelihood of running into this issue again is probably quite low but I thought I’d write this blog post in case anyone else comes across it as I did.

You’ve noticed that deploying virtual machines from template with customization specifications no longer complete and result with the following error in VMware View when attempting to deploy full clone VDIs:

Customization log located at C:\Windows\TEMP\vmware-imc\guestcust.log in the guest OS.

Reviewing the guestcust.log does not show any errors:

While the problem described above can be caused by many reasons, the reason I encountered a few weeks ago was one that I would have never guessed.  What caused the customization process to fail in this environment I had to troubleshoot in was that the ESXi version was from a release date that was later than the vCenter version.

Using the information provided by the following KBs:

Will show the following information for the ESXi host and vCenter:

If upgrading the host is not an option, a strange workaround I noticed was that the customization would complete successfully if I disable HA on the cluster: 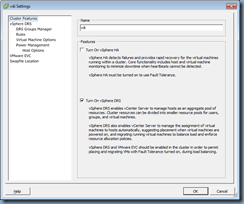 I’m not sure if this is specific to this environment but if there are no other options, try temporarily disabling HA and see if a new cloned VM would complete the customization.