I’ve received quite a few calls over the past year from clients and colleagues about situations where they had an existing single node NetScaler appliance deployed and decided to create an HA pair at a later time but noticed that adding a new NetScaler with no configuration to create the HA pair would wipe out the configuration of the existing node.  This issue has happened to me as well in the past and it’s one of the worst situations to be in if you did not have backup so this blog post serves to demonstrate how to add a new node to create an HA pair while keeping the configuration.

First off, I’ve tested creating the HA pair by adding the other node from: 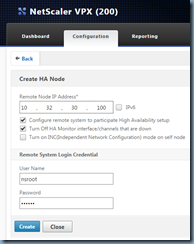 From within the Configure HA Node properties window, change the High Availability Status from ENABLED (Actively Participate in HA) to STAY SECONDARY (Remain in Listen Mode): With the new High Availability Status set to STAY SECONDARY (Remain in Listen Mode), proceed to add the node with the configuration: 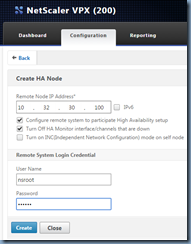 Proceed by editing the properties of the Secondary node (the new NetScaler without configuration) and change the High Availability Status back to ENABLED (Actively Participate in HA): 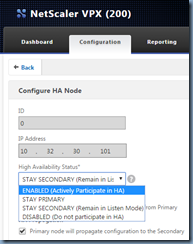 You should now have a new NetScaler HA pair with the configuration of the single node appliance.