VMware View 5.1.1 printer redirection with ThinPrint no longer works after upgrade from 5.0

I received an update from the engineer I was working with on this case today to inform me that the new 5.1.2 agent was out and to try it and it looks like upgrading the agent:

… fixes the issue as the TPAutoConnect.exe no longer crashes.

… for a client that was still on VMware View 5.0 and as well as the upgrade went, I was informed by the client on Monday morning that their remote users were no longer seeing their local printers in their home office.  This prompted me to log into my own virtual desktop from remote to have a look and I immediately noticed that I too as well did not see the local printers I had available from my laptop.  Subsequent logins would sporadically show the following window:

Windows can check online for a solution to the problem.

Check online for a solution and close the program 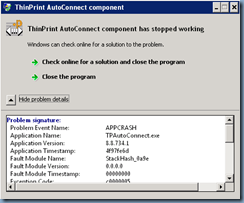 Browsing through the event logs also showed the following event logged upon restarting the virtual desktop and logging on: 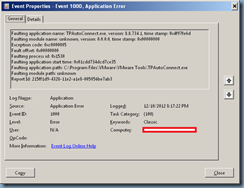 Doing a few searches on Google revealed one or two forum posts with other users complaining but no solution so once I realized this was probably something I couldn’t personally troubleshoot and fix, I opened up a support ticket.  It took a few days until I was able to speak with the support engineer assigned to my case and it looks like this was a known issue with VMware View 5.1.1 with the VMware View Agent 5.1.1.799444:

I was asked to review the following KB:

… which I was sort of surprised that I didn’t come across but then realized that it was dated December 10th (one day after the upgrade).

I have since uploaded the VMware View Agent logs to VMware via the following KB:

… so that the engineer can confirm.  From what I was able to ask the engineer during our short phone conversation, it doesn’t look like I can downgrade the VMware Agent to fix this and the only workaround is to use RDP instead of PCoIP.  I have since done a test by switching the protocol to RDP and the printer redirection began to work.

Per the 5.1.2 release notes resolved issues:

Network printers were not being redirected into desktop virtual machines after upgrading to View 5.1.