I originally thought I could get away with collocating a Lync Server 2013 enterprise pool with a Lync Server 2010 enterprise pool SQL server, by installing a new instance on the SQL Server that hosts our current Lync Server 2010 enterprise SQL database during the transition period over to the new pool but then I noticed that I am unable to create or select it if I define it prior to creating the new pool.  The phrasing of this issue I have is a bit confusing so let me itemized the situation in point form to better explain what I’m trying to do.

What I’m basically trying to do is to have multiple SQL Server Standard instances on the same Windows 2008 R2 Server to hosts the databases for both pools but when I try to create the new data store during the creation of the Lync Server 2013 pool, I receive the following warning:

I’ve also tried defining the store first as such: 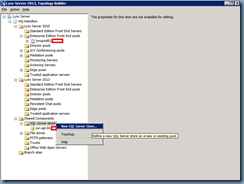 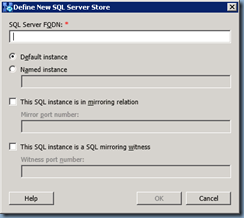 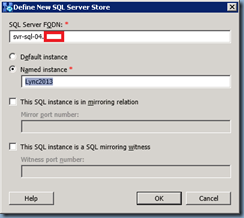 Which allows me to define the store: 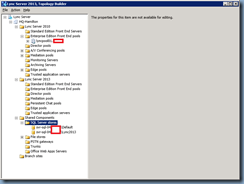 … but still doesn’t allow me to select it during the enterprise front end pool deployment: 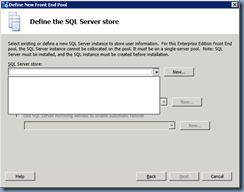 After browsing around the documentation on TechNet, I finally found the following snippet:

Topology Builder will display the following message to inform you of this issue: "The SQL server [FQDN of the server] already contains a SQL instance hosting role 'User Store'."

Guess a completely separate SQL server is the only way to go.

Did you try to create a CName to the SQL server?

Hi Terence
Did you ever find a solution for this?
Walter

Thanks for the info, didnt know that

Thanks for sharing this useful information regarding Database Server and Instance Storage. There is a very neccasary information.

The Tall One said...

I ran into a similar issue when doing a migration (not in-place upgrade) from Lync 2013 to S4B2015. In my case, I followed the guidance here to set a new alias on a new IP address
http://blogs.msdn.com/b/dbrowne/archive/2012/05/21/how-to-add-a-hostname-alias-for-a-sql-server-instance.aspx